Here’s what you should think about just before you swing, according to a PGA Tour pro 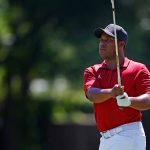 If you have trouble clearing your mind when standing over the ball, try this simple swing tip from PGA Tour pro Harold Varner III.

With all the moving parts that go into swinging a club, it is easy to overthink — paralysis by analysis is what some coaches call it. To overcome this brain freeze, you need one thought that can help you pull the trigger and make solid contact.

Ideally, this thought is simple: something that won’t make you think too hard but will help you perform under pressure. The thought differs for every golfer, but everyone is sure to have one.

Harold Varner III takes the simplicity standard to the utmost extreme. He told GOLF.com that when he’s standing over the ball, there isn’t much thinking going on about how he wants to swing the club.

“I really don’t think about anything — it’s the coolest thing ever,” Varner said. “I just play golf. I see the target, line up and swing.”

Sometimes, simple is better. And there’s no arguing with the results. Varner ranked inside the top 10 in SG: Tee to Green in 2020, and he’s putting together another excellent season of ball striking this season as he ranks inside the top 30 on the PGA Tour.

The philosophy comes down to keeping athleticism and naturalness in the swing. Varner doesn’t want to have too many technical thoughts running through his head that might sap him of his natural talent. So, he clears his mind and just swings.

“If you were going to shoot a basketball, would you be thinking about technique and how you’re going to aim it?” Varner said. “No. You’d grab the basketball, and you’d shoot it and try and score. It’s the same with the golf swing.”

If you find yourself suffering from paralysis by analysis, try clearing your mind for a few shots and just swinging. Rid your mind of technique and let instincts take over.

Or, as Varner put it, “Keep it simple, stupid.”