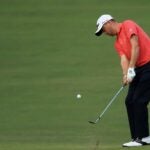 The Year of The Short Game.

Ah yes, the new year, a time teeming with fresh possibility and the hope of better days. The fresh perspective provided by the new year may hold true in a handful of different ways, but for those of us here at GOLF.com, New Year’s resolutions take a very specific turn: game improvement.

In 2021, my golf game reached previously unthinkable heights. I became a regular 80s-shooter (even flirting with the 70s on occasion), found my game stacked up against golf companions like USGA CEO Mike Whan and courses like the Olympic Club and Bethpage Black, and even dragged my handicap all the way down to a 10.3. It’s been a very good year for golf, but truthfully, I’m not nearly satisfied.

Back in November, I earned an invite to Westhampton Country Club on the east end of Long Island. It’s a lovely track — a Raynor classic on a sprawling, flat piece of land jutting out to Moriches Bay — the type of place that rests comfortably in the space between playable and deeply thought-provoking thanks to its short length and dastardly greens. But on the day I played Westhampton, I found my experience neither playable nor thought-provoking. Rather, I found my time wholly unenjoyable and more than a little eye-opening.

This, dear reader, is because my short game stinks. I can’t chip, I can’t flop, and I certainly can’t bump-and-run. Indeed, the only “plays” I’ve learned with a wedge in my hand are blades, chunks and chili-dips. My golf game has managed to survive for years on the back of my strengths — driving, iron play, and putting — rather than fixing my (very obvious) weaknesses.

Nowhere was this more apparent than at Westhampton, where devilish greenside slopes began requiring two, three and sometimes four chips to wind up on the putting surface. My old nickname of “Jimmy Three Chips” (bestowed by coworker/nemesis Sean Zak) had returned, and just in time for my final round of 2021.

My day at Westhampton was a wakeup call, to put it lightly, and as I walked to the 18th green, I heard myself inheriting a new goal for the offseason.

So, with 2022 in mind, I present my own New Year’s resolution — a chipping system stolen from short game guru and GOLF Top 100 Teacher Dave Pelz: the clockface.

Essentially, the goal of this short game strategy is to view your swing like a clock. The goal is to create a consistent, repeatable swing for all chips, with the only change to the system being the length of the backswing (shorter for shorter shots, longer for longer shots). Golfers should not alter their tempo or power when using this method.

To try this method, make a wedge swing with roughly 75 percent power from eight o’clock to three o’clock. Watch how far the ball goes. Then, make the exact same swing, but this time, bring the club from 10 o’clock to three o’clock, and measure the distance. Then 12 to three, and continue the process until you have hit a full wedge swing. Ultimately, you are aiming to learn a different distance for every hour of the clock, giving you 7-10 distances (from roughly 10 to 100 yards in length) that you’re comfortable hitting.

For golfers (like me) who struggle with consistent short game form, the clockface system helps to simplify the approach. Gone are attack angles and leading edges. Now, the only variable in any given chip is the shot’s distance. A longer shot will require a longer swing, while a shorter shot will require an adjustment in kind.

For those of us looking to simplify our short game (and stop tossing away strokes around the green), the clockface system is a simple, repeatable way to start shaving our scores down. For me, the goal is simple: I want another crack at Westhampton — this time, with my short game in check.

It’s time to get to work.