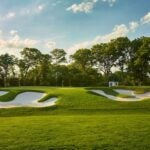 Bethpage Black is sure to make a *stunning* Ryder Cup venue.

The Ryder Cup is one of golf’s best traditions, but how did it become that way? History is a factor. With the conclusion of the 2021 Cup at Whistling Straits, there have been 43 editions of golf’s biennial match play event. But an equally important factor? Venue.

So, where is the event headed in the future? Below, check out the next four confirmed Ryder Cup locations — an eclectic mix of both former big-time tournament hosts and new faces.