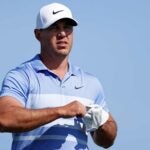 While Brooks Koepka's chip-in for eagle at TPC Scottsdale looked simple, it was anything but.

Brooks Koepka provided the first roar on a golf course in nearly a year Sunday at the Waste Management Phoenix Open. With fans back in attendance at the rowdiest venue in golf, Koepka gave them reason to cheer with his epic hole out for eagle on the 17th hole. The shot vaulted him to the top of the leaderboard as he claimed his first title on the PGA Tour in over a year.

The shot was an impressive one, no doubt, but Koepka made it look easy. It was a perfectly judged shot, and one that was executed to perfection, but while it might have looked simple for the champ, it was a shot that requires the utmost precision.

From where Koepka found himself after his drive on the fateful 17th, there was a large hump between him and the hole. From this spot, he had a difficult pitch if he wanted to get the ball close. With little green to work with, and a tier in his way, he had to strike a perfect shot to get the ball close.

As you can see in the green map below, provided by our sister company GolfLogix, Koepka was short sided to the right of the green, with the pin on a plateau in the back right of the green. Recreational golfers would likely try to hoist the ball in the air and try to get it to land softly. Koepka went in another direction.

Knowing that the high flop has a small margin for error, Koepka played a lower pitch shot. And in order to get the ball to check, he chose a landing spot in the fringe near the hump, taking some heat off the ball as it approached the cup.

“If I just caught it right in the fringe it was going to check up on me, and it did perfectly,” Koepka said. “Took a nice little right kick for me and didn’t look anywhere else but the hole.”

Recreational players can learn a lot from this shot — specifically how to use the fringe to slow down your chips and pitches around the green. Getting spin on short shots can be a difficult thing to do, especially for amateurs. Instead, use the fringe to your advantage.

Amateurs sometimes don’t choose a distinct spot for their shot to land on shots around the green. They typically just try to hit the ball to a general area and hope for the best. This can make executing the precision shots difficult. Next time you’re out practicing, start choosing a distinct spot you want the ball to land. Once you start hitting those spots with regularity, try choosing a spot on the fringe.

When you start hitting your spot on the fringe, you’ll see that the ball loses a lot of steam on the first bounce. The fringe is stickier and will slow the ball down, which is great for shots like the one Koepka faced, and can be great for you, too, especially when you’re short sided.

So next time you face a short-sided pitch, don’t go straight for the lob wedge. Instead, assess if a lower-lofted pitch that lands in the rough might be a more prudent option. It’s a crafty shot to have in the bag around the greens, and it is much lower risk than the flop shot.

If it worked for Koepka, it can work for you.