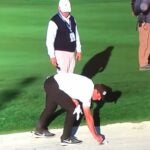 Viktor Hovland and rules official Steve Rintoul, on Thursday on the 18th hole at the Summit Club.

Viktor Hovland, on the 18th hole at the Summit Club on Thursday, hit his tee shot into a fairway bunker, it came to rest in front of a grass divot, and even three longtime players were all uncertain what would come next.

“I’m honestly not sure with the way that they’ve changed the rules that you can move certain things out of the bunker, but I’m not sure if a divot that has not yet been removed from the bunker,” analyst Morgan Pressel, also an LPGA Tour major winner, said on Golf Channel’s coverage of the CJ Cup. “Usually caddies would get in there and take that out.”

“Yeah, I thought the rule was — and we’re going to get it clarified when the official gets there, but if it’s not a natural, like a cigarette butt or something like that, you can pick it and get it out of there,” analyst Curt Byrum said. “But when it’s a natural — so I don’t know if they’re going to consider this like a natural part of the golf course or not.”

“I think it’s going to be treated the same as if it were a leaf that had blown in there,” analyst Trevor Immelman, also a Masters champion, said. “And he’s going to have to go ahead and play it.”

Prior to 2019, all three analysts would have been right. But a rule change that year allowed Hovland to remove — carefully — the divot without penalty.

According to Rule 12.2a, “before playing your ball in a bunker, you may remove loose impediments and movable obstructions.” The reason for the change, the USGA wrote in a release on their website, is that “the challenge of playing from a bunker is the need to play out of the sand, not to play with leaves, stones or other loose impediments left in place in the bunker. The previous approach created confusion by stating a total prohibition on touching the sand with a hand or club and then recognizing many exceptions.”

Hovland, after getting a clarification from rules official Steve Rintoul and under Rintoul’s watchful eye, removed the divot in four pieces. Then, with his left foot in the bunker and his right out, he hit an iron out of the sand, pitched on and birdied the par-5 closing hole.

“Well, he was able to make his lie a little bit better, but he couldn’t make his stance any better,” Pressel said on the broadcast.