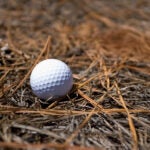 Somebody else picking up your ball is one of the most annoying things in golf.

Forgive me for turning today’s column into something between a personal rant and a screed, but in my highly unscientific personal experience playing golf recently, I’ve noticed an alarming uptick in a very annoying form of golf behavior. The most annoying golf behavior, perhaps.

Golfers hitting or picking up another golfer’s ball.

I was playing golf with GOLF.com’s own Zephyr Melton the other day as the golfer in the group ahead picked up each of our golf balls at different points in the round. A few weeks before that, it was only a last-minute shout from my playing partner that prevented a golfer in a different group from doing the same. Then again this very morning, I watched my playing partner pump a drive into the opposing fairway (by mistake) only for a golfer in the group playing that hole to casually pocket the ball before making his way along, before eventually tossing it back some 20 yards behind where it originally came to rest.

Anecdotal? Perhaps. But nevertheless, it’s worth pointing out why this kind of behavior is such a scourge on the recreational game:

All of which is to say, don’t be the kind of golfer that ruins your fellow golfer’s round, even if it’s accidental. The good news is it’s very easy to not do that.

First, make sure to give your ball a marking of some kind. The best kind are the ones that encompass a large area of the ball, like line all around the perimeter, or dots on each side of the ball.

On the other side of the equation: If you see a golf ball lying around anywhere that isn’t in the forest or a hazard, you’re better off just leaving it be and going along your way.

If you’re really itching to pick up the ball, take a moment before reaching for it. Look around and see where the golf ball might have come from. Take notice of the holes that are around you, and where the tees are. Keep in mind that you may not be able to see the golfer who has just hit their ball there, so don’t operate under the assumption that if it was someone else’s ball, the golfer would’ve revealed themselves by now.

And remember the golden rule: when in doubt, leave it.