Rules Guy: It is permissible to use the flagstick to get my ball out of the hole? 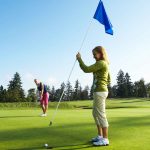 Must you reach down to grab your ball, or can you legally use the flagstick to extract it from the hole?

I have a bad back, so I pull the ball from the hole using the flag. In a recent match, my opponent said this was a penalty and that I lost the hole. We called the pro, and he agreed it was a penalty. Were they right? —Cheryl Kelly, via email

The best answer comes via Google. Type “device to get golf ball out of hole,” hit return, click the “Shopping” menu, and you’ll be presented with a wealth of options. There are “Pick-Ups,” “Retrievers,” “Claws” and “Grabbers” galore, even one called the “Back Saver.” Rules Guy strongly suspects they are less likely to damage the lip of the hole than your yanking method.

As to legality, the answer is: Your opponent and pro were both wrong. While your ball retrieval technique is strongly discouraged, the only potential penalty would be disqualification under Rule 1.2(a) for Serious Misconduct, which would only come into the picture if you repeatedly damaged cup after cup after being asked to stop using the flag as a scoop.

Again, however: Please find a gizmo to do the job more safely for you and the cup alike.