Rules Guy: Is it a penalty to hit the sand in anger after a poor bunker shot? 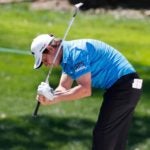 Will your bunker tantrum cost you a penalty? Rules Guy has the answer.

A member of our group has a reputation for throwing clubs. After a bunker blast that stayed in the bunker, he tomahawked his wedge into the sand. Does this cost him a penalty shot for grounding the club? —William Neal, Outer Banks, N.C.

This vexed individual might be in luck. Rule 12.2b(2) covers the ways you can touch the sand in a bunker without sustaining a penalty.

Striking the sand in anger is one such exception, providing you haven’t improved any conditions that might be involved in the next stroke.

Pre-2019 Rules, the only potential sanction was a DQ for serious misconduct. Now there’s another possibility: Committees can adopt a local rule that applies a one- or two-stroke penalty for behavioral issues. Best solution: Grow up.