Rules Guy: If you lose your club during a round, can you play with a ‘loaner’ without penalty? 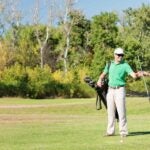 Does a loaner club count toward your 14-club total?

Mid-round, a golfer realizes that his driver is missing. He calls the pro shop and asks if anyone has turned it in. No, but a marshal soon arrives with a loaner driver, which the player uses. A few holes later, the marshal returns — with the golfer’s original driver, finally found. They now switch out the player’s borrowed club for his own, which he proceeds to use. He never had more than 14 clubs in his bag. Is there any penalty in this scenario? —Cal Shipman, via email A question for you, Cal — when did this scatterbrain lose his driver? It makes all the difference here.

Let’s say he left it on a tee box at the club yesterday and unwittingly arrived on the first tee today with 13 clubs in his bag. In that case, he’s fine, as clubs can be added mid-round (borrowed, retrieved from one’s locker, what have you) so long as he doesn’t exceed 14 clubs or use a club that someone else is using.

Conversely, if Mr. Absent-Minded lost his driver during today’s round, he’s got a problem, because a lost club still counts toward one’s total during a round. That loaner driver means he now has 15 clubs, and once this is realized the player must declare it out of play, and he gets a two-stroke penalty per hole for the violation for a maximum of two holes in stroke play.

In match play, you finish playing out the hole when this is realized, and at the end of that hole, whatever the status of the match is, there follows a maximum adjustment of two holes to the state of the match.

In either case, once you become aware of the rules breach, you must immediately declare the club out of play — fail to do so, and you’re disqualified.

Do you struggle to shallow the club? Try this subtle move in the backswing

Use these 6 exercises to power up your golf swing

How to understand your misses (and why you hit them)