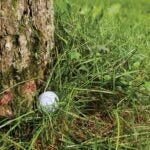 What do the rules say about using the *back* of your club to hit a tough shot?

I play right-handed. Recently, my ball stopped inches from a tree trunk. I considered turning my 4-iron upside down to hit the ball as a lefty but decided to play left-handed with the back of my putter. Allowed? — Dave Silkwood, Troutdale, Ore.

Yes, Dave, it’s allowed — provided you didn’t push, scrape or scoop the ball with the head of whatever the club, per Rule 10.1a, lest you get the general penalty of two strokes in stroke play and loss of hole in match play.

A ball must be “fairly struck,” which thankfully isn’t the same as saying it must be well struck.

Without wishing to cast aspersions on your backhanded-putter skills, we hope you considered employing Rule 19.2 instead — sometimes penalty relief is the percentage play.

For more club-usage guidance from our guru, read on …

We were playing with the “lift, clean and place” local rule in effect. A player in my foursome was in the fairway and started to roll the ball with his clubhead before realizing that it’s lift, not roll. He proceeded to mark his ball and go through the procedure correctly. But had the player committed a violation by first touching the ball with his club? — Dudley Campbell, Scottsdale, Ariz.

There may be no erasers on golf pencils, but there’s a very handy one in the Rules of Golf. Dudley, say hello to Rule 14.5, aka the “Eraser” rule. (No, Rules Guy didn’t make up that nickname; it’s a real thing.)

This rule allows for correcting without penalty a mistake in dropping, placing, replacing or substituting a ball, as long as it’s done prior to the player making the next stroke. So, while it is in fact required to use your hand when placing a ball, in this instance, since the mistake was corrected, it falls under “no harm, no foul.”

Had it not been corrected, the sanction would have been one penalty stroke for replacing in a wrong way.