Rules Guy: Is there such a thing as a tee that’s too long? 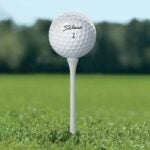 How long is too long when it comes to tee length?

At the end of a recent match, I noticed that my opponent had a six-inch-long golf tee affixed to his bag. I immediately claimed the match. Was I wrong? —Rob Gent, via email Where to begin? Freud might be, er, better equipped to answer the question of why your opponent had a six-inch-long tee, um, hung on his bag. As to the Rules, there are a few issues to consider.

Once a match is final, it’s the rare situation where you can revisit the result, and it would have to involve new information becoming available to the player making the ruling request. And the player accused of using a nonconforming tee — the legal limit, per Rule 6.2b(2), is four inches, with a two-stroke penalty for the first breach and disqualification for the second — would have had to have known that it was indeed a breach before the result of the match had become final.

Given that you don’t even know if your opponent used the illegal tee, your claims of victory seem presumptuous at best.

Only if your opponent admitted that he knowingly flouted the rule could there be an ex post facto result reversal.