Rules Guy: How far behind the tee marker can you tee up the ball? 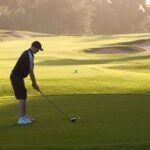 What do the rules say about how far behind the tee markers you can tee up your ball?

I know that you’re allowed to tee up a certain distance behind a tee marker — but how far, exactly? Also, some tee markers can be quite deep — I’ve seen rectangular plates a foot long. Is the marker defined by its front end (the side closer to the hole), or its back end? Obviously, one needs to know so as not to tee up ahead of the marker, but I also have a playing partner who feels his irons are so precise he wants to use that foot to his advantage. — Randy Feldner, McLean, VA

Though it is neither here nor there and, as Tiger would say, it is what it is, your playing partner is either a Tour pro in disguise or suffering from delusions of grandeur often associated with narcissistic personality disorder.

As to what defines the teeing area, see Definition of Teeing Area: It’s a two-club-length rectangle measured and bounded by the front and outside edges of the tee markers.

To anticipate a follow-up, “club-length” is always defined as the longest club in your bag that isn’t a putter. Now your knowledge is as precise as your playing partner’s irons (ironic cough implied).

For more tee-related guidance from our guru, read on …

My home course has a safety net that lines the left side of a tee box. A playing partner hit the furthest pole holding up the net, and the ball flew back behind the tee box, though it was still in play. But are the pole and netting treated the same way as overhanging wires? Which reminds me … how are overhanging wires treated again? — Thomas Gilmore, via email

If nothing else, your playing partner’s foozle certainly seems to underscore the wisdom of the safety net!

This is simply a case of a ball in motion accidentally deflected by an outside influence, as covered in Rule 11.1.

The choices are to play the ball as it now lies or take stroke-and-distance relief under Rule 18.1, which in this case would allow for a re-tee, now playing 3.

Not to leave you with a, er, cliffhanger, but overhanging wires would be handled by local rule; this might entail a cancel-and-replay requirement should a ball strike a wire or line of play relief for the wires of temporary immovable obstructions.