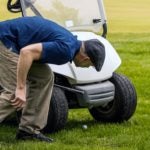 Good news! You found your golf ball. But is it too late?

Player A hit his drive into the rough. After the allotted three minutes of looking, we considered the ball lost, but when Player B moved his cart the ball was in plain sight. We felt it was only fair to let Player A proceed without penalty, but I’m sure we violated a rule. Which one? —Ron Crosser, via email

Dare I say, there’s no carte blanche for a cart block. As for fair, that’s a four-letter word, as is lost, which is what the ball in fact is, since it wasn’t found in time. The player must play under stroke-and-distance…unless (a) you were playing match play and (b) nobody was sure how correctly to proceed under the rules (which, oddly enough, “I’m sure we violated a rule” suggests… arguably). In that instance, a + b = you can decide amongst yourselves how to handle the situation, even if that procedure turns out to be as wrong as playing in flip-flops. This doesn’t hold for stroke play, since the field must be protected, and what’s verboten in both match play and stroke play is for players to agree to waive a Rule of Golf, under penalty of disqualification. Ignorance isn’t quite bliss, but it beats collusion 9 and 8.