Rules Guy: Can you post a round when you play an extra ball just for fun? 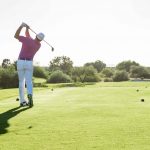 What do the Rules of Golf say about playing multiple shots during a round?

The pace of play was really slow the other day, but the starter squeezed me in as a single. To kill time between shots, I played two balls, using the same ball first every shot and scoring only that ball. Can I post the round for handicap purposes?
—Ray Mainville, McKinney, Texas

Rules Guy has been there, done that and bought the T-shirt, as the kids like to say nowadays. (Do they still say that? RG hopes so.)

What he didn’t do is post his score, because for a score to be acceptable for handicap purposes, the round must be played under the Rules of Golf — and playing two balls is not considered to be doing so.

The other fly in the ointment is that you also must play in the company of at least one other person for a score to be acceptable for handicap purposes. That was a somewhat controversial rules change but, remember, Rules Guy doesn’t make the rules—he’s just a guy who tries to elucidate them.

Read on for more handicap-related rulings …

If I play a USGA-rated course on a simulator, following all other rules of golf including putting, is that score eligible to be posted for handicap purposes? —Luke Walsh, via email

Just as, for the moment, you can’t win the Tour de France at home on your Peloton, nor Wimbledon on your Wii, you can’t post a virtual round toward your actual handicap.

That said, it is not at all unreasonable to think that this could change in the not-too-distant future. Blue-blazer caricatures notwithstanding, the USGA is a more progressive organization than generally understood, and you can bet that this is an issue the governing body will keep an eye on as technology and more evolves. These are the 6 keys to Rory McIlroy's effortless swing