Rules Guy: Is it legal to add a piece of tape to my putterhead? 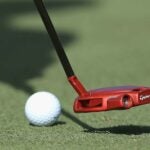 What do the rules say about adding tape to putterheads?

I have an old TaylorMade Spider putter but didn’t like the white line on the black clubhead, so I stuck a piece of white tape on the head and drew a red line with a Sharpie. Is this legal?
—Vince Zachetti, via email

A confession, Vince: Over the past half-century, Rules Guy’s father, Tinker Guy, has butchered untold number of putters in his basement workshop, a.k.a. “The Lair,” including sawing off the toe of a Scotty Cameron. Blowtorches to the hosel, Wite-Out dabbed on the topline, chair glides stuck to the sole, ball bearings shoved down the grip and into the shaft: We have seen flatsticks suffer all manner of dubious plastic surgery through the years.

Never once did Tinker Guy ask if he was violating the Rules, and in filial deference, nor was this information imposed upon him. Now it can be told: Tape affixed to the putter is a nonconforming external attachment and renders the club nonconforming. Under Rule 4.1a, once you make a stroke with said club, you are disqualified.

For more putter-modification guidance from our guru, read on …

I have an old Odyssey 2-Ball putter. One of its plastic discs fell out, so I pulled out the other one, then cut golf balls in half and glued them in as replacements. Has my modification made the putter illegal? —Michael Karlins, Chesapeake, VA

Kudos, Michael, to your DIY skills — but your “hack” is indeed impermissible.

The clubhead must be “plain in shape” under the Equipment Rules Part 2/4a, and by adding the halved balls you’ve rendered the putter nonconforming. Make a stroke with it, and you’re disqualified.