Learn from Rory McIlroy and use the rules to your advantage 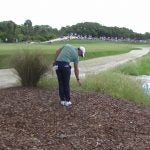 There's a lot to be learned watching the pros handle rules situations.

Those of us who woke up early to watch the PGA Championship Saturday were treated to yet another opening tee shot blown right of right by Rory McIlroy. He did it on the 10th tee Thursday and on the 1st tee Saturday.

Well, after McIlroy rinsed his first tee shot, he didn’t have to repeat it, thankfully. He got to take a drop from just outside the hazard line at the point of nearest relief. That meant dropping beneath a tree in a large, mulched area. Not good at all. But it could have been better.

McIlroy did as many people would and began creating his relief area. Two club lengths from the hazard to create a semicircle behind that spot. Before long he was standing over it, ball in hand, hoping for a decent lie  as he dropped on the uneven mulch.

The lesson: he didn’t have to do all that!

As evidenced by the broadcast, and Rule 15.1a/3 of the Rules of Golf, McIlroy could have created a much more even area for his ensuing drop. Since the ball is being replaced but not in a specific spot, McIlroy could have cleared the tiny, irregular bits of wood from the area and dropped on whatever soil lay beneath. Chances are it would have been dirt, sand or some flatter combination of the two.

Every piece of the mulch is technically a loose impediment, which is why if McIlroy’s drive simply landed there, he’d be entitled to remove any large piece of mulch that sat in the way of his golf ball, so long as that didn’t move the ball or change the lie itself. Perhaps he wanted to drop from the mulch, but that might be stretching the hypothetical a bit.

The important clause for anyone who wants to implement what McIlroy didn’t do is that you cannot even out any irregularities in the surface of the ground. Removing loose impediments is fine, but the land that lies beneath those impediments is considered part of the course. From there, play it as it lies.

For McIlroy, it wasn’t a huge issue, mainly because he’s one of the greatest players in the world. He pinched his approach perfectly off the mulch and actually got it to check up almost immediately on the green. He’d two-putt from 36 feet for a disappointing bogey. It’s very likely we wouldn’t have been so lucky.