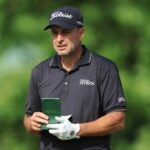 Richard Bland during the PGA Championship at Southern Hills.

For Richard Bland, that about sums it up. In a bizarre incident that involved his golf ball, a squirrel and at least three rules on Friday at the PGA Championship, he could have said a few other words, too.

The sequence in question was captured in an 18-second video by a bystander at Southern Hills. It was shared by Bland on Saturday morning, and a look at the event’s leaderboard shows that it appears to have happened on the 459-yard, par-4 3rd hole. There, after a drive into the left trees, Bland punched out, and his ball rolled a few yards onto the green.

Here’s where things got … squirrelly! (Very sorry.) The Tulsa, Okla., rodent had watched the ball coming, it darted up to the green ahead of the ball, appeared to stop it with its right paw (or possibly its head) — then the ball rolled back down into the fairway. Bland bogeyed from there.

And the squirrel? It was gone.

Is there a rule for the ball rolling back down the fairway under, it appears (more on that next), natural forces? Yep, rule 9.3 covers that: “If natural forces (such as wind or water) cause a player’s ball at rest to move: There is no penalty, and the ball must be played from its new spot.”

One more. Could Bland have argued that the squirrel moved the ball backward? Yes — but it would have to have been “known or virtually certain,” which is the USGA’s standard for determining how to proceed in these scenarios. If it were clear that the squirrel shoved the ball backward, Bland would have received relief under rule 9.6, which states: “If it is known or virtually certain that an outside influence (including another player in stroke play or another ball) lifted or moved a player’s ball: There is no penalty, and the ball must be replaced on its original spot (which if not known must be estimated)”

Another one actually then. What’s the definition of “known or virtually known?” This is key. “Known or virtually certain means more than just possible or probable,” the rules book reads. “It means that either: There is conclusive evidence that the event in question happened to the player’s ball, such as when the player or other witnesses saw it happen, or although there is a very small degree of doubt, all reasonably available information shows that it is at least 95% likely that the event in question happened. ‘All reasonably available information’ includes all information the player knows and all other information he or she can get with reasonable effort and without unreasonable delay.”

Could Bland have made that call from 150 yards away? It’s even hard to tell from the cellphone video.

So he played on. And bogeyed.

Bland shot 74-76 at Southern Hills and missed the cut by seven.