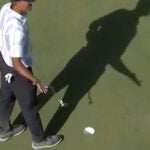 Seonghyeon Kim on Sunday on the 18th green at the Summit Club.

And then it really got interesting.

In one of the more bizarre sequences you’ll see over a shot that went barely over a yard, Kim’s ball would also eventually drop. And it would activate not one, but two rules of golf.

To begin, Kim’s putt, his fourth shot on the 588-yard, par-5 18th at the Summit Club, hit the left side of the cup and finished there, the ball resting maybe an inch from spilling over during Sunday’s final round of the CJ Cup. Kim stood straight up, flipped his putter over, slid it through his left fingers and rubbed his temple.

It’s right about here where the first rule came into play. According to rule 13.3a, on a putt overhanging the hole, “the player is allowed a reasonable time to reach the hole and 10 more seconds to wait to see whether the ball will fall into the hole.” After his rim-out and initial reaction, Kim took eight steps to the left and past the cup, stopped, walked back to the hole, motioned to tap in, stood straight up again — and the ball dropped.

“Look at that,” announcer Steve Sands said on the Golf Channel broadcast.

One problem: On a review, Kim’s ball fell after the 10 seconds allotted; in all, 26 seconds expired from the moment when his ball stopped above the cup to the moment it dropped into it. Kim would receive a one-stroke penalty, and his birdie would become a par.

Which brings us to the second rule. Kim had signed his card for the birdie. But, according to an exception to Rule 3.3b, his score would be adjusted and he’d avoid disqualification. The rule states: “If one or more of the player’s hole scores are lower than the actual scores because he or she excluded one or more penalty strokes that the player did not know about before returning the scorecard: The player is not disqualified. Instead, if the mistake is found before the close of the competition, the Committee will revise the player’s score for that hole or holes by adding the penalty stroke(s) that should have been included in the score for that hole or holes under the Rules.”

Kim would finish the final round with a three-under 69, and he’d tie for 32nd. Had the putt fell under the 10 seconds, he would have finished in a tie for 25th and made just over $17,000 more in prize money.

“So unfortunate for him,” Immelman said on the broadcast.