Rory McIlroy says this is his ‘favorite’ swing thought 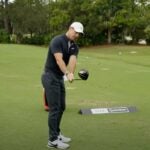 Rory McIlroy has a swing thought that he always turns too whenever his driver gets off, and it's simple enough for you, too.

After what can best be describe as an up-and-down season in 2021, Rory McIlroy seems to be playing shades of his best golf in 2022.

A second at the Masters courtesy of an exhilarating final-round 64, followed by a fifth at the Wells Fargo last week, seem to have finally set Rory back on the right track.

‘Keep the club in front of me on the backswing’

Earlier this year, Rory spoke about the work he’s been doing with his longtime swing coach Michael Bannon, specifically, the feeling that his left arm is “initiating” the backswing as the club extends out. That prevents his arms from getting ‘stuck’ too far behind him on the backswing. And in a recent video from his equipment company TaylorMade, it was a thought he reiterated: Preventing the club getting too far behind him on the backswing, a feeling he grooves with a short rehearsal before he swings.

“Any time I keep the club in front of me, it makes the club a lot simpler,” he says. “Anytime it gets too far behind me, then it makes it a lot more difficult because the club has to travel a lot further to get back in front of me.”

Want to overhaul your own bag for 2022? Visit the expert fitters at our sister company, True Spec Golf.