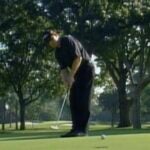 Leonard's routine will help you read more break in your putts.

Yesterday, I wrote about a mistake that 96 percent of golfers do: They don’t read enough break on their putts. A majority of those golfers actually need to double the amount of break they play on their putts — and even then probably wouldn’t be reading enough break.

It’s actually quite impressive, when you think about it. You’d be hard-pressed to find anything else that almost every single golfer around does, but not playing enough break is one of them. But we’re not about problems here at GOLF.com, we’re about finding solutions. Which is what sent me down a rabbit hole the other day and came back with a couple of throwback clips from Justin Leonard, who boasts one of my favorite putting actions of all time.

He also, in a this old “Playing Lessons from the Pros” clip on Golf Channel, has some handy advice that solves the problem of under-reading putts, and helps you play faster, too.

It all comes down to his putting routine, which Leonard calls “a little different.”

First, Leonard says he takes a quick read of the putt. He doesn’t spend too much time on this part, he says; he’s merely trying to get an idea of which direction it’s going to move. 2. Feel it with your feet

In some ways the most important part of Leonard’s green-reading come when he stands up to the ball. He makes a few practice strokes, looking at the hole, adjusting to what he sees with his eyes and feels with his feet.

“I’ll see what the line is doing, and try to feel in my feet what the ground is doing by my ball,” he says.

“I’ll come back and reset, and I’ve moved my spot [that I’m aiming at] probably another inch or two higher,” he says.