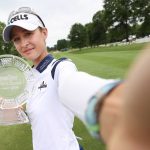 Nelly Korda on Sunday after winning the Meijer LPGA Classic.

Nelly Korda, sometime last weekend, turned on a TV or scrolled through social media. Bubba Watson was being interviewed on Golf Channel after his second round at the U.S. Open. Matthew Wolff had just returned from a two-month absence to focus on his mental health, and Watson, who’s been candid about his own experience, was asked about his own “state of mind.”

“That’s really the most important. So when you hit a bad shot, I am going to get upset about it, but it really means nothing. And I know I say that and tomorrow I’ll probably throw up on myself, but it’s one of those things where I love this sport so much. It’s given me so much, it’s blessed my family so much, so I try so hard, which is the problem. You’ve got to take the try out of it and just swing freely, like [Rory] McIlroy does. Gosh, it’s impressive to watch him just swing for the fences, and who cares? That’s where I wish I could be.”

“I was listening to Bubba talk yesterday, and I’m like, you know, it makes so much sense what they say,” Korda said Saturday. “We take golf so seriously when you’re out here. You love it so much and you may say, oh, like, it’s just golf, but, I mean, definitely their words struck deep after missing the U.S. Open last week.

“I just have to realize it’s golf. There is going to be a lot more tournaments ahead of me and I’m going to miss a lot more cuts, I bet you that. But as long as I’m learning from each situation, I think that’s the most important.”

Korda was talking after her third round at the Meijer. During the round, she was talking with her caddie, Jason McDede, and her playing partners. Laughing, too. And then she shot a 10-under 62 to tie her career low. And a 67 on Sunday to win her second tournament of the year.

Yes, the good golf was good, she said. But so is golf on its own. Even without the good.

“I mean, yeah, missing the cut was hard last — or my last event, at the Open. Kind of have to take a step back and look at it in a sense how Bubba and Wolff were saying,” Korda said. “It’s golf. At the end of the day, just enjoy it. Have fun. You’re lucky to be out here.

“So kind of new perspective in a way. It takes someone to say it out loud for you to realize it deep down inside, but when you play well throughout the season, like I’ve had a pretty good season, you just put so much pressure on yourself. Takes kind of the enjoyment out of it.”

This week, Korda plays the KPMG Women’s PGA Championship, another major. Though 22, she remains saddled with zero wins in the big events. Korda’s come close. Earlier this year, she tied for third at the ANA Inspiration, which is where she also finished at the 2019 PGA. Last year at the ANA, she led by two shots with four holes to play, only to lose in a playoff. Will she break through?

“I just think today, I just enjoyed myself honestly,” Korda said Sunday. “I just kept telling myself, if I make a mistake, it’s golf. Come on, it’s golf. Like just keep on going. It’s golf. That kind of, like, eased me up.

“And I just had fun with my caddie. I was laughing out there a good bit, which on Sundays when I’m in the final group, I forget to smile and laugh and I’m so zoned in on hitting these perfect shots and making sure I execute everything perfectly that when something is off just a little bit, I get so angry at myself and so hard on myself. Today, I was like, OK, we take it how it is and just enjoy the moment.”