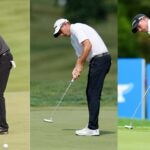 Jim Herman has cycled through three putting grips over his career.

Jim Herman has had an unlikely career on the PGA Tour.

He owns three Tour victories, but he didn’t win the first one until he was 38. In 2019, when he won the Barbasol Championship, he accomplished an almost-unheard-of feat as he failed to qualify for the FedEx Cup Playoffs despite owning a victory on the season. And with his win at the Wyndham Championship, he joined Tiger Woods as the only other 40-something to have a win on Tour this season. The similarities with Woods don’t go much further than that.

Woods has been known for his steadfast commitment to keeping things consistent on the greens. Sure, he’s changed putters a few times (most recently at the PGA Championship), but for the most part, he doesn’t deviate from what works. The same goes for his putting grip, with a conventional grip guiding him to 15 major championships.

Herman has been quite the opposite. While Woods has ridden consistent setups on the green to 82 victories, Herman has been a compulsive tinkerer as he searches for putting consistency. In fact, for each of his three wins, he’s used a different grip technique.

“For those that struggle putting, you definitely experiment often,” said Herman, who ranks 209th this season in SG: Putting.

Herman used a claw grip for his 2016 win at the Houston Open, a conventional grip at the Barbasol last summer, and a cross-handed grip at the Wyndham. Three very different techniques, but they all produced the same result at week’s end.

He said he’d been using the conventional grip mixed in with some claw until recently, but a poor week on the greens at the PGA Championship had him looking for answers. So he changed to cross-handed. The results were immediate as Herman made over 400 feet of putts and ranked third in the field in SG: Putting.

“My coach, Bill Davis, has always told me putt however you feel like,” Herman said. “Whatever’s comfortable, whatever’s rolling the ball the best for you … When you’re putting poorly, I don’t mind changing.”

While seeing a pro golfer tinker with their grip so frequently might be odd, it’s not a bad strategy for recreational golfers. If something isn’t working, don’t be afraid to change things up a bit. If it can guide a Tour player to three wins, it could help you, too.

“I’ll try to go with winning with four different putting strokes,” Herman joked. “(But) hopefully, this one can stick and I can roll the ball like I did this weekend.”