How far from the hole should you leave your lag putts? We found out 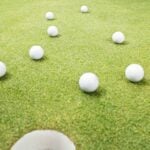 We found out how far from the hole your lag putt should roll.

When Jim Herman teed off on the 178-yard, par-3 16th hole of the final round at the 2020 Wyndham Championship, he trailed the leader Billy Horschel by one stroke. Herman knocked his tee shot to five feet. His birdie putt missed and rolled four feet past the hole. Was his putt too aggressive?

You’ve heard it claimed that the optimal distance a missed putt should roll past the hole is between one and one and a half feet. I wanted to put that conventional wisdom to the test. PGA Tour pros are some of the best putters in the world, so I looked at millions of their putts in the ShotLink database to see what they actually do and what the rest of us might learn from them.

Some of the findings might surprise you. One, in particular, nearly knocked me off my feet. Because putts come in different lengths and degrees of difficulty, this can be a complicated topic. So let’s simplify our discussion by starting with putts of 10 feet or less.

For putts of that length, the goal is to one-putt (while avoiding three-putts). You can’t one-putt without getting the ball to the hole, and PGA Tour pros are very good in this department. They leave just 7 percent of their 10-footers short. Weekend golfers are another story. They leave 17 percent (more than twice as many) of their 10-footers short. The cliché is true: never up, never in! And the lesson is clear: Most amateurs would benefit from being more aggressive on 10-foot putts but — and this is crucial — not so aggressive that they leave themselves with a missable comebacker.

Tour pros are very good in this department, too. Their median proximity of missed 10-foot putts is 1.6 feet, meaning half of their missed 10-footers finish within 1.6 feet of the hole and half finish farther than 1.6 feet. What this result masks is the influence of slope on proximity to the hole. For 10-footers with a large (3 percent) slope at the hole, the median proximity of missed uphill putts is 1.1 feet and missed downhill putts is 2.1 feet. (If 12 o’clock is straight downhill, then I consider putts between 11 o’clock and 1 o’clock to be downhill and putts between 5 o’clock and 7 o’clock to be uphill.) This disparity is due to gravity. A putt that is traveling at a good speed at the hole — between dying-at-the-hole speed and hitting-the-backof-the-cup speed — will roll out farther when it’s going downhill.

Obvious, right? But here’s something mind-blowing in the Tour pro data: Proximity is larger for shorter putts. On five-footers with a large (3 percent) slope at the hole, median proximity of missed uphill putts is 1.4 feet and missed downhill putts is 2.4 feet. That’s right. The guys on Tour cozy their putts closer from 10 feet than they do from five feet. On those five-foot putts, in fact, amateurs leave their misses closer to the hole than pros.

The bad news for amateurs is that they also leave more of their five-footers short; on 5 percent of their attempts, they don’t even get the ball to the hole.

Tour pros, by contrast, leave less than 2 percent of their five-footers short and three-putt less than 1 percent of the time. That’s key for weekend golfers: Make sure to get almost every short putt to the hole but not by banging the putt so hard that a miss turns into a three-jack.

All of this points to another important takeaway: From shorter distances, the goal is to one-putt without putting yourself at risk of three-putting. But as the distance increases, one-putting become less likely and the goal shifts to two-putting. On shorter putts, you want the center of the scatter pattern to be beyond the hole, ensuring that few putts are left short. As the putt distance increases, the center of the scatter of missed putts should move closer to the hole. That increases the chance of a two-putt, even if it also increases the number of putts left short.

Herman’s five-footer that rolled four feet by the hole wasn’t too aggressive. He made the comebacker for par, and his birdie on the next hole turned out to be good enough for his third Tour victory.

Get your putting dialed in