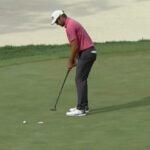 Billy Horschel might be sending Corey Conners an expensive bottle of wine soon.

Horschel was battling to get into the top 30 of the FedEx Cup Playoffs during the final round of the BMW Championship on Sunday at Olympia Fields, and he received some last-minute help from Conners.

Horschel was in 31st place in the projected standings as he rolled a long birdie putt toward the hole on the 18th, but when the broadcast returned to Horschel and Conners’ pairing a few minutes later, Horschel was tapping in for par and instead projected for 30th, the last and final spot for the lucrative and incentive-rich Tour Championship.

What happened in the couple of minutes the broadcast was away? Conners three-putted from inside five feet, making double bogey. He rolled his par putt over the right edge and his come-backer lipped out. His double bogey sent him to seven over for the tournament, tied with Horschel. It also bumped Horschel into the season-finale, where he’s got another chance to earn some major cash.

“I knew I could make up a shot and move up a spot with a birdie or if someone above me could move down into my category at plus seven; I know that would be beneficial because I saw on 17 I was tied with Adam Long,” Horschel said. “It was really unfortunate. You never want to see something like that happen to anybody; if it turns out that was how I made it to the Tour Championship I’ll probably give him a nice bottle of wine or a good dinner or something.”

Turns out Horschel did, securing the last spot. (Conners was 53rd.)