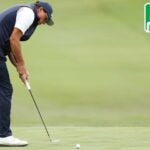 Phil Mickelson made some tweaks to his putting last week.

Phil Mickelson had an adventurous start to his 29th PGA Tour season, including hitting driver off the deck from a forest and coaching a rogue marshal who mistakenly picked up his ball. But in the nearly three decades we’ve gotten to enjoy Lefty’s brilliance, adventure is what we’ve come to expect.

It was ultimately a middling T36 finish for Mickelson as he sprinkled flashes of brilliance with stretches of struggle. But if nothing else, the week served as an incubator for some tweaks to his putting. Mickelson made two changes to his putting in Napa, borrowing a bit from his past, while also embracing some new-age tech that has become popular in recent years.

In a nod to his past self, the 51-year-old tried to get his patented forward-press technique into the same position he used as a kid.

“It’s getting to that same position every time,” he said. “I’m not overpressing, I’m not underpressing, so my launch characteristics when I get on the Quintic system is very consistent and that’s what I’m looking for.”

And while Mickelson searched for answers from his past, he also embraced a bit of modernity in the form of an arm-lock putting grip. After experimenting with the grip extension for the last six weeks, he finally put the putter in the bag during competition last week.

“I had been working on it and in some practice rounds like I’ll get on a roll and just start making a lot,” he said. “It takes a little getting used to, but it seems like I’ve had moments where I just start rolling it in from everywhere.”

The changes appeared to do some good for Mickelson’s putting. He gained .529 strokes on the greens for the week (good for 41st in the field) and was lethal from 15 to 20 feet. He made 54.55 percent of his putts from that range and easily led the field in that category.

“I thought I putted really well,” he said. “That’s good that the ball’s hunting the cup and tracking.”

Max Homa is officially a three-time PGA Tour winner, and he credited the reigning Player of the Year for the mental fortitude needed to get the job done in Napa.

“[I] learned a lot from what Patrick Cantlay said after the Tour Championship,” Homa said after his win at the Fortinet Championship. “I saw a press conference he did where he kind of said that he just tries to be himself at all times. And I try to kind of be introspective and think, well, who am I?”

Homa concluded that when he plays at home, he likes constant chatter on the course. He tried to bring his at-Homa (get it?) attitude with him to the tournament, being wholly himself while between the ropes.

“If I have something to say I’ll say it to either my caddie or whoever I’m playing with,” he said. “So I tried this week to talk a lot and be me and not feel like I was being any different than who I am. Like I said, I learned a lot from what Pat said in his press conference at East Lake.”

If you’re going to draw inspiration from someone, the reigning Player of the Year isn’t a bad place to start.