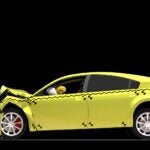 If you don't think a car will stop in time, you won't drive as fast. Is the same true in the golf swing?

The topic of the discussion was a deliciously nerdy one: stopping power in the golf swing, and whether non-dominant golf swing training can help.

Or, to translate into simpler terms: Whether practicing swinging from the opposite side can help you hit the ball longer.

Because this column is all about helping you play smarter, better golf, here’s a rundown of the things you need to know:

The best way to understand the stopping-to-go-faster theory is to forget golf swings for a moment. Instead, imagine that you’re in a car on a road that’s 300 yards long — and that there’s a brick wall at the end of that road. Your goal is to go as fast as possible without dying via a head-on crash into the brick wall at the end.

Even if the car you’re driving is capable of reaching a top speed of 300 mph, if you know the brakes aren’t good enough to stop before you crash into the brick wall, you’re not going to accelerate the car as fast. Your goal is to not crash into that brick wall, after all, so even though your car could technically go faster, you wouldn’t allow it to because you’re trying to stay alive.

(Random aside: Top Gear did a funny test along these lines a few years ago, which you can watch below)

Now think about how the same approach would apply to the golf swing. Your body may be able to swing faster than you think, but if your brain thinks your muscles aren’t strong enough to stop the club by the time you reach your follow through, your innate survival instincts will take over and slow the club down.

Just as you would drive the car slower if you knew it had bad brakes, you’d swing the golf club slower to avoid injuring yourself. It’s called “The Big Break Theory”, as TPI’s Dr. Greg Rose explains:

Our theory is that you will only accelerate to the point of which your body knows you can safely decelerate. Therefore, the stronger and faster your decelerators are, the faster you can develop your accelerators.

Does it actually matter?

The one interesting caveat in all of this is that swinging a golf club at high speed does have a natural speed bump built into it already: The literal act of hitting a golf ball.

As biomechanics professor and inventor of The Stack training aid, Dr. Sasho MacKenzie explains below, hitting a golf ball takes upwards of 20 mph off your golf swing. It’s a natural decelerator which does a significant amount of the work of slowing down the club for you.

Why No Non-Dominant Swings with TheStack.mp4 from Sasho MacKenzie on Vimeo.

Sasho points this out to explain that every time you swing a golf club without a golf ball — or in his case, using The Stack training aid — you’re effectively stimulating your stopping muscles more than you need to than when the time comes to actually hit the golf ball, because again, the ball does a significant amount of the work of slowing the club down. It’s why he designed a training aid that doesn’t involve swinging from the opposite side of how you hit the golf ball, and is skeptical that doing so would even strengthen the key muscles you use to stop the golf club, anyway.

What we don’t know

If you made it this far, this whole thing can be oversimplified as: Yes, the big break theory is probably a real factor. Our bodies are hard-wired to stay safe and probably won’t resist going faster if it feels in danger (this is something Bryson DeChambeau preaches often, by the way). But, we also have to be honest about all the things we don’t know: How important this theory is, how best to examine this theory, how significantly training stopping muscles is compared to your actual speed-generating muscles, and how best to train for them if we do deem them significantly important.

That, in some ways, is the beauty of the golf swing. It’s been around hundreds of years, yet there’s still so much we don’t know. Still plenty of time to debate about it on Twitter, though.