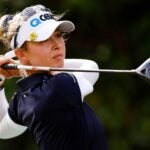 Nelly Korda, the podcast host says, has a “beautiful swing.”

“It’s obviously very effective,” he says. “You’re long off the tee; you hit a lot of greens.”

The world No. 1 then blushes at the compliment from Adam Scott, himself a former world No. 1 and himself the owner of one of the most visually appealing swings in golf.

And yet, Korda admitted on a recent episode of the Fairgame podcast, she’s not a “club nerd.” “I’m like, it’s good, I don’t know what this is, I like it, I’m putting it in the bag,” she said. Nor is she “technical.” (She says she’s never looked at a Trackman until this year.) But, as her seven wins, Olympic gold medal and you, me and Adam Scott can attest, she is technically sound. How can both worlds exist, you ask? Once upon a time, in describing his thoughts on hitting irons, another world No. 1 said his dad told him, at the end of the day, to K.I.S.S. — keep it simple, stupid. And Tiger Woods did.

And in a revealing moment on the podcast, so does Korda. It’s not as if she has no swing thoughts. They’re just light.

As in a certain soft drink.

“I don’t try to be technical at all,” said Korda, who will be playing with her dad, Petr, at this week’s PNC Championship. “Like, I hate spending time on the range. Like, I hate it. Absolutely can’t stand it. Like I could spend maybe 45 to an hour, but recently in the past year and a half, I’ve definitely been spending more time on my swing, especially recently.

“My main thought in my swing, because it gets really long, is shoulder to chin. Once my shoulder hits my chin, then I start my downswing. And tempo. My dad, you know, obviously, he’s from Czech, so we would always say, Co-ca Co-la. So that was my — Co-ca Co-la. That’s my tempo.”

Co-ca Co-la. Easy peasy. But, while she’s not technical, she is self-analytical. On the podcast, Korda said she has 11,000 swing videos. “I’ve got a lot of iCloud storage.”

Notably, too, in the peeling back of the Korda process on the podcast, is that she also ducks “social games.”

“I cannot do it,” Korda said. “Because I get lost in being social and then I get really frustrated because I start playing poorly. So when I’m out there, I have to do my work. I always keep my stats. It’s like OCD now. I keep my stats every single time I play, but I cannot do social golf. I am so bad at social golf.”

“So you’re on, you’re just on, right?” asked Andrew Haines, another one of the podcast’s hosts.

“Yeah, because I try to get in the mindset of I’m out playing a tournament,” Korda said. “I’m trying even to put a lot of pressure on my putts. Like I’ll even be like, OK, for the U.S. Open. I try to get some pressure over putts and shots, and I try to be really serious, but I love playing.”

To listen to the complete podcast — and you should! — please click below.