‘Lucky’ golf items might actually work, according to study 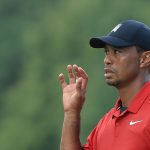 Have a lucky golf item? It might actually be lucky.

The U.S. Open is back at Torrey Pines this week, for the first time since the most memorable moment of my life as a golf fan: Tiger Woods, sporting a broken leg and a one-shot deficit, draining a slippery 12ft birdie putt to send the contest into a playoff. If he missed, the tournament would be over, with Rocco Mediate crowned your 2008 U.S. Open champion.

But this is Tiger Woods we’re talking about. I still can’t believe this putt actually went in.

Putts like this don’t go in for any one reason. It’s a combination of technical brilliance, mental acuity, overall skill, God-given talent, and a little bit of luck. We’ve talked plenty about those first four things in regards to Tiger Woods, so today we’re interested in the fifth: Luck! And specifically, how you might be able to use it to help you play better golf.

‘I’d rather be lucky than good’

That day, Tiger had two lucky charms in-play: His Tiger headcover, and his legendary red shirt — both good items courtesy of his mother.

Golf fans for the most part consider those two things a fun, if ultimately inconsequential, factor in his game. And they’re probably right — but those two lucky items may be more than that, according to a 2010 study by Lysann Damisch, an assistant professor of psychology at the University of Cologne in Germany, published in the journal Psychological Science.

The study included three different experiments — including one golf specific one — and on each occasion found those with lucky items outperformed those who didn’t.

All of which is to say there’s some evidence that lucky charms might actually work, if nothing else, through a placebo effect. It provides a psychological boost that can increase your confidence and release tension.

“Especially in situations where people feel a bit insecure and thus want to gain some confidence,” the study’s author said.

So if you’re hitting a wall in your game and not sure what to do next, reach throw on a good luck charm and see what happens. It might just helps.

And if you don’t have one of those, from me to you: Good luck!