Kiawah’s 17th hole, and the difference between brutal and ‘bad’ golf holes 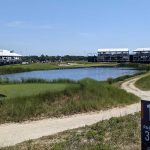 There's no margin for error at Kiawah's 17th hole.

Welcome to Play Smart, a game-improvement column that drops every Monday, Wednesday and Friday from Director of Game Improvement content Luke Kerr-Dineen to help you play smarter, better golf.

KIAWAH ISLAND, S.C. — Peter Malnati was making practice swings with a hybrid, his ball perched high on a tee, and the wind whipping off the Atlantic Ocean.

On Sunday, the winner of the 2021 PGA Championship will need to navigate Kiawah Island’s notoriously difficult 17th hole unscathed if they want to walk away with the trophy. But this isn’t Sunday. It’s Monday, which is what led to Malnati’s revelation.

“I’m not going to hit from here,” he said to the crowd, who laughed and applauded as he picked up his ball and advanced to the front of the tee box. “It’s too hard!”

Even from his advanced spot, the hole was playing just north of 230 yards, Malnati said. He hit a good shot, but not good enough. His ball finished in the bunker just left of the green.

Getting a lay of the land on the ground ahead of another Kiawah major championship, I found myself wondering what makes for a brutal golf hole — and what happens when a brutally difficult hole veers into “bad” territory.

If there were a golf course designed intentionally to exist on the right side of that line, it’s Kiawah Island’s Ocean Course. It’s easy for golfers to conflate the two things in a moment of anger, but make no mistake. There’s a distinct difference between bad and brutal golf holes — one we’ll see front-and-center this week.

Brutal holes: There’s no such thing as an ‘OK’ shot

The 17th at Kiawah Island is where we started, so let’s dive right back in.

At its limit, the par-3 17th can stretch to over 230 yards, though officially its yardage is 223. Water runs short and all the way up the hole, to the right of the green, which gives the hole a kind of dogleg-right feel.

The beach is to the right of all that, which means the wind usually blows steadily in a south-westerly direction and leaves golfers hitting back into it.

Flanking the left outermost seam of the hole is an elevated stretch of man-made dunes, which pitch the two bunkers back toward the green. This isn’t any comfort, because it means any shot into those will leave you with a downhill bunker shot, into a green sloping away from you toward the water.

It all amounts to an incredibly difficult golf hole. Some may say unfairly so, but they’d be wrong. This is a brutal golf hole, yes, but not a bad one in the slightest.

Because despite the various booby traps laid out before you, there’s a very simple way to avoid all of them: Hitting an exacting fade.

There’s a safe sliver of fairway short of the green running up the left, sandwiched between the water and dunes. Most players this week will likely aim there and work a fade into the middle of the green.

And if you do that, you’ll probably be rewarded.

As you can see below, I’ve plotted four potential pin locations onto a Golf Logix heat map (Golf Logix is an affiliate company of GOLF.com’s). You can see that the green funnels toward each of these locations. The green, dare I say, is actually designed to help you make birdies. The challenge is that the rest of the beastly par-3 isn’t, which makes for lots of brutally black-and-white, birdie-or-bogey outcomes.

Holes like these are exactly why I love the Ocean Course specifically and Pete Dye-style target golf generally. It’s a bit harsh that you have to hit a very specific shot from 223 yards into gusting winds — without any margin for error in-between — in order to get your rewards, but the fact that there are rewards is what keeps a brutally difficult golf hole like this from the alternative. …

Bad golf holes: There’s no such thing as a good shot

We’ve all played golf courses that have a ridiculous tee shot, or a silly green, or just an outright bad golf hole on it. The kind you have to apologize for in advance to any first-timer who may be playing with you.

It’s pretty rare that you’ll see ‘bad’ golf holes at the top level, but you will occasionally see holes — through no fault of the course architects — get turned into bad holes because of over-the-top course setups.

The 7th hole at Shinnecock during the 2004 U.S. Open was perhaps the most obvious example in my lifetime. Putts were rolling into bunkers; chips trickling off the greens. Retief Goosen, during the final round, hit his ball into the bunker short of the green — which was widely regarded as the best spot to be on the hole.

Again, on this occasion, the hole isn’t a bad one in itself, but rather was turned into a bad one by the setup. Nevertheless, it belies the essence of a bad golf hole: When good shots don’t get rewarded.

Kiawah doesn’t have bad golf holes. It has lots of brutal golf holes: Holes when medium shots don’t get rewarded. That’s fine with me, and by week’s end, we’ll see the best golfer win because of it.