This is the key to being a successful Ryder Cup captain 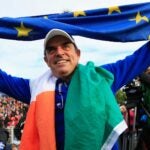 Paul McGinley captained the Europeans to a Ryder Cup victory in 2014.

For many, Ryder Cup captaincy is the culmination of a career of stellar play and participation in the premier team event in men’s professional golf. Arnold Palmer, Jack Nicklaus and Seve Ballesteros are just a few of the hall-of-fame names that you’ll see when looking at a past captain’s list, and that company will only become more prestigious as time goes on.

But past success is not necessarily an indicator of future triumph when it comes to the Ryder Cup captaincy. The skillset for a Ryder Cup captain is wide-ranging, and ultimately it can be difficult to predict who will serve the role best when their name is called.

Paul McGinley played the role to perfection as the European captain in 2014, guiding the Euros to a 16.5-11.5 victory in 2014, and on this week’s Off Course with Claude Harmon podcast, he shared his thoughts on what it takes to be a successful captain.

“You want to have as many players in form as possible going into a Ryder Cup,” McGinley said.

However, winning a Ryder Cup is not only about having players in form at the right time. It’s also about crafting a team that is suited for the course setup that will host the event.

The Euros proved this theory true in 2018 as captain Thomas Bjorn assembled a team of tacticians well-suited to attack Le Golf National, as the blue and gold blew out the heavily favored Americans 17.5-10.5 in France.

“The lesson that I’m sure that all of America would have learned from France is adapting your team to the paper examination that Whistling Straits is going to pose,” McGinley said. “It’s not going to be played at a sterile East Lake or wherever the BMW Championship was the week before with no wind and humid and just A to B and the ball will stop dead.

“So [Stricker] making his pairings and getting his team prepared for the examination paper that is going to be at Whistling Straits is obviously the key.”

Check out the entire Off Course podcast below.