How to pick the right golf coach for you 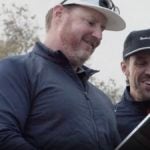 Erik Anders Lang has been working for with his GOLF Top 100 Teacher, Dana Dahlquist, for a few years now. He came to Dana hitting a low slice with the dream of one day hitting a high draw, which has since become his stock shot.

Dana and Erik re-connected late last year for a few lessons, so we wanted to tag along to get an up-close look at the pair’s relationship as part of a four-part series.

In the first episode, EAL and Dana talk about the importance of choosing the right coach to entrust with your game.

First things first, students need to make sure there’s a personality match with your teacher.

“I’m sort of the contrary tour teacher,” Dahlquist says. “I don’t even like using that term, because I work at a municple course in Long Beach,”

“I love that,” Anders-Lang says. “It’s one of the things I vibe with the most.”

Along those lines, it’s important for the student to establish their goals early and understand how a coach will help them achieve that. Often, that involves a teacher explaining their philosophy.