How to properly deal with on-course embarrassment, according to an embarrassed golfer 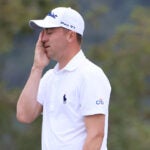 A few weeks ago, I joined a trio of coworkers for one of the more important rounds of my still-nascent golf career.

To put it plainly, I am not a very good golfer. Like many high-handicappers, my moments of brilliance are typically followed by prolonged periods of utter catastrophe. And on this day, I was hoping for a moment of brilliance while simultaneously preparing for … not brilliance.

See, I was set to join my coworkers Josh Berhow, Tim Reilly and Zephyr Melton for a Friday round of golf at Willow Creek — a Long Island staple at which I had never played. And incredibly, I had already managed to put myself in the position every high-handicapper fears most: simultaneously the worst golfer in the group and the one with the most to prove.

Shortly before 11:00 a.m., I found myself walking to the first tee without a clue of how my swing would look and feel. I’d spent the previous few weeks finally receiving swing lessons, and the ensuing changes had improved the look of my swing but drastically hindered its consistency. As often happens in the midst of a swing change, the setup, takeaway and impact position were better, but the result was not.

Yet, my swing hadn’t stopped me from spewing three days worth of trash talk toward my coworkers, two of whom are more than a decade my senior. I wanted to play well — partially to beat them, partially to prove to them that their green, 23-year-old coworker had some game, after all.

But the problem with being green and 23 years old is that sometimes you bite off a bit more than you can chew. Unbeknownst to me, I’d developed a bit of a swing hitch. When I came into the downswing, my lead side flew open too quickly. The problem meant my already-too-short clubs couldn’t reach the bottom of the swing plane. The result was an ugly, irreversible skull despite a swing that looked (and felt) fine.

It was awful. I mean, truly awful. Like, the worst-round-of-the-year bad. Throw out the scorecard bad. Like, pray to god that your coworkers suffer from a sudden and severe bout of amnesia and forget they spent four hours watching you do that, bad.

And then, blissfully, it ended. Here are a few insights into how I survived.

1) Expediency is your friend. Nobody enjoys playing with someone who’s having a terrible day, but they like it a lot less if you’re spending an hour grinding over each shot, putt and search for your far-off ball. Think about the people around you, and make sure they’re not waiting for your mistakes any more than they should be.

2) So is laughter. You suck. Everybody on earth knows you suck. You can’t hide it anymore, and you shouldn’t hide it anymore. It’s okay to admit that things are going badly for you. Maybe it’ll help you hit a few decent shots, but if it doesn’t, at least your playing partners will be less uncomfortable talking about it.

3) Pick up when you have to. For the love of god, just pick up and keep it moving.

4) Try to stay in it mentally. I wound up winning a hole in our match despite my train wreck of a round, which is a lesson for everyone else. If I can do it, so can you. Now, I understand that it’s pretty hard to keep yourself fully together when you’ve lost the capacity to hit a golf shot, but try to hit the reset button after every bad hole. You’ll be better for it in the long run.

5) Focus on the controllable. I wish I would’ve done a better job with this, so learn from me. I pridefully insisted on hitting just a few clubs off the tee when I simply couldn’t make consistent contact. Instead, I put myself out of nearly every hole and struggled to give my playing partner something to grasp onto. If I’d just allowed myself to play irons, I would’ve at least given myself a shot.

6) Focus on feel. If the mechanics of your swing aren’t working (as mine weren’t), keep your mind on a few feel-based thoughts. You might not fully fix your miss, but you’ll find that you’re focusing on the ancillary stuff less, which can help you get in play more.

7) Buy the post-round drinks. Your playing partners had to watch you yuck it up on the course for the afternoon, don’t make them buy your drink, too. Consider it your debt to the golf gods. Pay with a clear conscience, tip well, and hope that (like me) your game turns a corner soon.