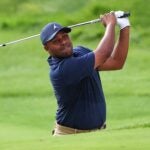 Harold Varner credited an improved attitude for his fine play at Liberty National.

A week ago, Harold Varner III had an attitude problem.

It was the third round of the Wyndham Championship, and Varner had airmailed the green on the par-4 11th hole at Sedgefield Country Club in Greensboro, N.C. This was after a clean, three-birdie 32 on the front side that had moved Varner into contention. The miscue left him in a bad spot and four shots later Varner — who’s known for his warm smiles and approachability — sulked off the green with a double-bogey 6. He was irate.

“I’m still pissed about it, actually,” Varner said Thursday at The Northern Trust Open, just across the river from downtown Manhattan.

The poor shot nagged at Varner through the remainder of that third round, and his closing triple-bogey was another blow to his morale.

Later that evening, surrounded by friends at his Charlotte-area rental house, Varner turned to an ancient elixir.

“I had about two beers,” he recalled, “and I sat there and just talked to people that I love and care about, and they’re just like, ‘What happened?’ We just talked through it. Communication is good, and it’s hard to do it on the course. Need to do more of it so that you can just [say], ‘Hey, I hit it in the water, over the green, whatever that might be, and carry on.’”

Varner said the impromptu therapy session — “self-reflection,” as he put it — was much needed. “That’s how you grow up,” he said.

As in other sports, mental health has become a hot talking point in professional golf. Matthew Wolff has spoken at length about not wanting to get out of bed for fear of playing poorly in front of crowds. Bubba Watson said he once lost up to 30 pounds because of work-related stress. Even the usually peppy Rory McIlroy has said he has struggled with letting bad rounds affect his mood. “I’ve been letting my golf influence my attitude on the course instead of the other way around,” he said recently.

Those three cases, of course, represent a wide range of challenges, but they’re all reminders that golf is as mentally demanding a sport as any. To most players, a good headspace is as essential to contending as sound technique. Maybe more so.

Which brings us back to Varner’s journey, and in it, a lesson for all golfers.

“I just had a terrible attitude and having a bad attitude probably makes me more mad than playing bad golf,” Varner said Thursday. “That’s the only thing you control. You don’t really control what you’re going to shoot or where your golf ball is going to end up, but you control how you approach each shot.”

You don’t really control what you’re going to shoot or where your golf ball is going to end up, but you control how you approach each shot.

He wasn’t just preaching. Varner said he brought his new mental approach into the humps and bumps of Liberty National this week. And after 18 holes? He’s tied for third, after a smooth five-under 66. He did it with stellar ballstriking and a hot putter (he picked up nearly three strokes on the field on the greens Thursday) but also with something less tangible. Yep, a better attitude.

“You can’t be just moping around there. It’s golf. Everyone has to deal with it. Quit being a…”

And here he stopped himself.

“…I would say something else if I wasn’t on camera.”