Rules incident sees 2 balls out of bounds, a ruling and a man in slippers 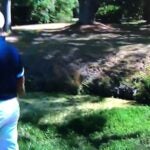 Harold Varner and a man on Friday on the 6th hole at Harbour Town Golf Links.

Two golf balls out of bounds. A rules official and a ruling. A man in a white T-shirt, shorts and slippers trying to help. What didn’t this rules incident have?

In a bizarre sequence during Friday’s second round of the RBC Heritage, Harold Varner hit his tee shot right and toward a white-staked out-of-bounds area on the par-4 6th at Harbour Town, he called on a man to identify a ball, Varner confirmed it was his after the man bent down to look, and Varner and an official eventually determined the ball was not in play by inches. But PGA Tour Live announcers in Hilton Head, S.C., believed the ball was also touched by the man, which could have cost Varner the penalty.

“It might have just hurt him severely there,” said an announcer on the broadcast. “And to anybody watching that ever has the opportunity, never, ever pick up a golf ball that’s on the ground. If you can identify it, identify it, but don’t ever touch it.”

After Varner hit his iron, a search began, but separating the fairway and the right rough from where the ball could have ended up was the start of a small creek. Enter the man dressed in a white T, shorts and brown slippers, who was on the other side of the water and likely staying in one of the nearby houses. As broadcast on PGA Tour Live, Varner’s caddie asked him to check a ball that was out of bounds by a few feet.

“I thought I heard it hit over here, but I didn’t see where,” the man said. He bent over to look at the ball, then shouted back to Varner, “Black-marked Titleist 1.”

It wasn’t his. Then, as Varner started to walk back toward the tee, the man yelled over again.

“Does it have a black dot on it?” Varner said.

But as the man again bent down to look, PGA Tour Live broadcasters believed he may have moved the ball to identify it. Had he, Varner would have been able to move his ball back to its original location under Rule 9.6, which states: “If it is known or virtually certain that an outside influence (including another player in stroke play or another ball) lifted or moved a player’s ball: There is no penalty, and the ball must be replaced on its original spot (which if not known must be estimated) (see Rule 14.2).”

From there, Varner, his caddie and a rules official crossed over the creek, and they determined that the ball had crossed over the white O.B. stakes by inches and that Varner would hit from the tee again. The ball was not moved again; Varner, in fact, left it there.

“OK, here’s the key,” the announcer on the broadcast said as Varner and the official talked. “The gentleman found the ball, picked it up and moved it so now they’re trying to figure out, did he actually move it from inbounds to out of bounds and where did he move it from? … As of right now, the ball is out of bounds. But when he picked it up, he didn’t necessarily put it back in the right same spot. Now they’re trying to figure out — they’re going to hunt this guy down and get him to give his best interpretation to where the ball actually was. Unless it’s already been decided. If that’s the case, he’s getting a ride back to the tee.”

Varner double-bogeyed the hole, finished with a one-over 72 and did not talk about the ruling to reporters afterward.

“I don’t blame the gentleman at all because they’re asking, does it have a red two, does it have a black dot,” said a second announcer on the broadcast. “And he was just trying to help them identify it. Perhaps Team Varner should have thought about moving the ball and maybe taking an effort to go over and identify it themselves. That could have been possible, rather than have the gentleman do it.”