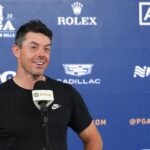 Rory McIlroy is coming into the PGA Championship heavier than usual, preparing for a busy stretch where he knows he'll quickly shed it.

TULSA, Okla. — Rory McIlroy isn’t just coming into the year’s second major playing the best golf of his season — with a top five in each of his last two starts. He’s also coming into the PGA Championship at Southern Hills heavier than usual.

Ordinarily Rory keeps to a ultra-high protein diet free of gluten, eggs and pork. Speaking ahead of the PGA Championship, Rory said he wanted to add some muscle since his runner-up finish at Augusta, and says he’s gained about 10 pounds in all, which means he’s coming into the event hovering around 180 pounds.

“There’s probably a little bit of excess fat in there … the diet hasn’t been quite as disciplined as I’ve wanted it to be,” he says.

But Rory isn’t sweating it — he’s saving that for later this week.

McIlroy loses about five pounds during tournament weeks — “I usually have to go up one notch in the belt at the end of the week,” he says — and while on off weeks it’s easier to maintain his goal weight, that task becomes more difficult on the road.

So, Rory wanted to increase his weight before a busy week of tournaments (he’s currently scheduled to play five of the next six weeks) so he can burn through that added mass without dropping under his ideal weight. And with the weather at Southern Hills forecasted to threaten 100 degrees later this week, adding both muscle and fat knowing that he’ll burn through it quickly in the Oklahoma heat became of utmost importance.

“To have a little bit in reserve and extra energy stores is never a bad thing,” he says. “I always notice when I do put a bit of weight on my speed goes up, so that’s something that I guess is an added benefit.”