Could this personality test help Team USA win back the Solheim Cup? 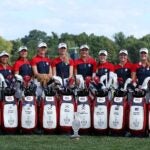 Every member of Team USA took a behavioral assessment to determine who they would be grouped with during the Solheim Cup.

TOLEDO, Ohio — During the first practice round open to fans at the 2021 Solheim Cup, Team USA appeared to already be vibing.

Megan Khang was trying new TikTok dances on the range at at Inverness Country Club, and yukking it up with Nelly Korda during an interview. At one point, Khang shouted to Lexi Thompson to get her teammate in on the fun.

“Lexi! Do you know how to Smeeze?” (For those of you as out of the loop as I was on this, the “Smeeze” is the newest TikTok dance craze.)

“Come over here! You HAVE to try this!”

“I’m hitting balls right now,” Lexi replied, half-chuckling before wheeling back to her spot on the range and continuing to dial in her wedges.

With a team of big and varying personalities, U.S. captain Pat Hurst has been tackling no small task: forming a cohesive group of players that can put the screws to the Europeans and take back the Solheim Cup on U.S. soil. One of the tools she has leaned on?

“We did a behavior profile,” Hurst said during the captains’ press conference Wednesday. “That’s basically how we put the pods together, that’s probably 75% of it.”

“It’s about how you respond to certain situations and how you are on the golf course versus off it,” assistant captain Stacy Lewis told GOLF.com. “A lot of people are very different.”

The test, which dates to 1928, focuses on four personality traits: Dominance, Influence, Steadiness and Compliance — all of which are important when it comes to forming a successful team in a high-pressure situation, like say, the Solheim Cup.

Essentially, the test asks an individual to answer a bunch of questions and then shows you where your personality falls on a big circle split into four colors: red, yellow, green and blue. Each color has associated traits as follows:

Blue: Detail-oriented and needs a lot of facts when dealing with almost any topic

So how does knowing this about the members of Team USA help form the pods, and create a successful team environment?

The DISC behavioral assessment helped identify which members of Team USA should be paired together based on how they like to operate, allowing the captains to create balance within the pods.

On Wednesday, there was no official word on which players landed in which pods, but there was seemingly an obvious giveaway: the interview schedule. The 12 U.S. players will conduct their pre-match press sessions in three groups of four:

Will the assessments — and the pods — work? Check back Monday.