How Michael Jordan’s basketball workouts were based on his golf 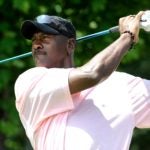 Michael Jordan loved to let loose on the golf course, before and after games.

Even before The Last Dance aired, Michael Jordan’s obsession with golf had been well-documented.

He’s stood over $100,000 putts, played with a teenage Justin Thomas with big money on the line, hosted numerous charity golf tournaments and built an exclusive golf club that is almost complete and boasts an elite membership.

For Jordan, the court is where he made his money and the course is where he let loose. But being an elite athlete meant that everything he did on and off the court had to be taken into account to ensure he remained fit and healthy.

On Barstool’s Pardon My Take podcast, Jordan’s trainer, Tim Grover, was asked, “Did playing 36 or 54 holes of golf before a game conflict with any of your training methods?” Grover emphatically acknowledged that he had to take Jordan’s rounds into account when trying to create workouts for the NBA’s best player.

“Very rarely did he play 36. There were quite a few times that he did 18,” Grover said. “And that was actually a part of allowing his mind to relax. It was his reset, but he never took it to the point where it would be a hinderance to his performance.”

Grover went on to explain how he took Jordan’s rounds into consideration when programming his basketball workouts. “Before we had all these analytics, I would actually chart how he played the days he golfed before a game, the days he golfed after a game, practices and so forth and see how he would perform,” he said. “If there was an adverse effect, I’d be the first one to point it out.”

As the guardian of Jordan’s fitness, Grover took his job seriously. Acting as the original FitBit, he would watch replays of games in slow motion so he could count how many steps Jordan had taken, how many explosive moves he’d performed, how many times he jumped, and so on to ensure MJ’s training was balanced.

While Grover didn’t have access to replays of MJ’s rounds on the course, a man this meticulous wasn’t about to ignore the extra strain and exercise Jordan was putting his body through.

And given the mental benefits Jordan reaped from being on the course, Grover wasn’t about to tell him he couldn’t play 18 before or after a game, either.

For Grover, as long as Jordan was physically fit and performing well on the court, his golf habit was kosher.