3 sure-fire tips to stay hydrated on the golf course 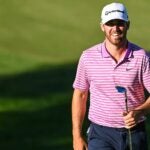 Matthew Wolff takes his hydration seriously, and you should too.

Golf is no longer viewed as a quasi-sport. Golfers are athletes, especially at the PGA Tour level. Between the intensity of movement it requires to swing a club at high speeds and walking a course somewhere in the five-mile range, golfers are definitely breaking a sweat.

That’s also where a brand like Gatorade comes in. Gatorade signed Matthew Wolff to its roster of elite athletes on Tuesday, making him just the second golfer to join the brand since Tiger Woods. You may not be a professional athlete like Wolff or Woods, but that doesn’t mean you shouldn’t take your hydration seriously. Here are three tips to stay hydrated on the golf course. Because proper hydration is so important to your overall wellbeing, Jaclyn London, MS, RD, CDN and Head of Nutrition & Wellness at Weight Watchers, recommends starting your day with one or two glasses of water. Doing this helps you get a jump on your body’s needs and serves as a good reminder to be consistent with your water (and food) intake. As a general rule of thumb, London suggests people drink 8-10 cups of fluids per day, adjusting for your activity level, sweat rate and other factors as needed.

This old maxim holds somewhat true. According to the Mayo Clinic, if you’re thirsty, there’s a good chance you’re already dehydrated, having lost as much as 1 to 2 percent of your body’s water. While this loss isn’t enough to bring on severe symptoms of dehydration, it’s best to drink some water if you’re thirsty to avoid the negative symptoms of dehydration like stress, irritability and headaches, all of which can ruin your round in a hurry.

3. Coffee isn’t as dehydrating as you think

If you’re the type of person who can’t do anything before they’ve had a cup of coffee, go ahead and drink your cup of joe! As mentioned above, you should be drinking 8-10 cups of fluid per day. That fluid doesn’t necessarily have to be water. While caffeine can be dehydrating, the water in a cup of coffee (or tea) more than makes up for the effects of the caffeine, leaving you more hydrated than you were before your morning brew.