Dustin Johnson has the simplest tip for how to putt 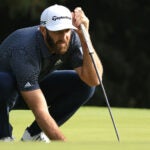 Dustin Johnson lines up a putt on the 1st hole at Augusta National Golf Club.

Dustin Johnson, this week at the Masters and throughout his 2020 tornado of a season, has had his brother and caddie, Austin, straddle his golf ball with his legs on greens in order to help him with reads. Johnson, as GOLF’s Luke Kerr-Dineen described, sometimes uses the line on his ball in order to help too. Johnson, before winning the Travelers Championship this summer, also auditioned a handful of putters in order to find one that fit best.

All of which really just translates to this.

“I just try to hit it down the line,” Johnson said with a laugh.

Easy enough. Good enough. Johnson tied the 54-hole scoring mark at the Masters to lead heading into the final round, and a win would cap a year in which he re-rose to No. 1 in the world, won three tournaments and finished in the top 10 in the other two majors. At Augusta National, Johnson was tied for 22nd in the field in putting average entering the final round, with 1.65 putts per hole, and he’s three-putted just once.

His hands have also helped, he said.

“For me, I try to get my hands a little bit higher so I don’t pull it,” Johnson said. “It’s kind of something that I always try to do.”

Austin Johnson has assisted, too.

He picked up his brother’s bag seven years ago. For the past two, he’s employed the straddle technique, in which he stands over the ball as Johnson lines up the putt before the two discuss the read.

“We spend a lot of time working on the putting and working on our lines and how we’re reading putts, and so it definitely helps, and a lot of times we read them pretty much the same,” Johnson said. “So it just reassures me that I’m seeing it correctly and feeling it right.”