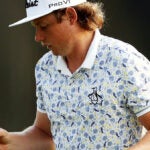 Cameron Smith is contending at the Masters.

As somebody who enjoys writing about lines on golf balls a little too much, and as a line-user myself, the 2020 Masters marks something of a high point for the movement. All of the top-four players use a line on their golf balls, and two of them — Sungjae Im and Cameron Smith — do so in a wholly unique way.

But first, let’s start with DJ, who has an on-again, off-again relationship with the line on his golf ball. In short, he uses it (pointing toward his line) when he feels like it: Almost never on long putts, and mostly on shorter, more makeable putts with not a lot of break. He relies on his feel to make the decision, but on the whole: if he’s facing a putt inside 10 feet with a cup or so of break, he’s probably using a line.

But while Johnson’s line-using approach is often the most interesting on a given week, he’s been bested this week by his two chasers: Smith and Im. Both players mark a straight line on their golf ball, but interestingly, they don’t point the line at their target. Instead, they set it perpendicular to their target line and on the other side of the putter head, so the line acts like an equator of the golf ball that’s level to the ground.

I couldn’t get a picture of it on the golf course, but if you look closely below, you can see how Im does it.

Im used to putt with the line the traditional way but made the switch to using it equator-style in the weeks leading up to the Masters to give himself a fresh perspective. Smith has been doing it for longer, but both do it for the same reasons: Setting the line so it acts as the equator of the golf ball is a reminder that that’s where they want to make contact with the ball. They want to stroke up slightly, but make contact with the ball in its equator, so it sets about rolling end over end.

And so far, it’s working for both. Im ranks third in putting this week, and both players sit inside the top six for total birdies. They’ll have some work to do to catch DJ, but if they line it up just right, they may slip on a green jacket at the end of it.