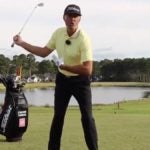 There are three main things that make pros different from amateurs.

Pro golfers are different from you and me. They play the nicest courses, have the nicest clubs in the bag, and have a seemingly unlimited supply of apparel at their disposal at all times. They swing the club differently, too.

1. Balance in the backswing

Most amateurs overturn in their backswing, specifically when hitting shots with their irons. Yarwood explains that there is no need to get the club to parallel when swinging these shorter clubs in order to make a proper swing.

“They’re restricting their turn and resisting against the trail side there, so their arm swing never gets too far back,” Yarwood says. “If you watch all the great players, the club never gets near parallel with an iron … They’ve got good sequence and good resistance of the trail side.”

As pros get near the top of their backswing, they are shifting the pressure of their swing earlier than amateurs in order to generate torque, and with it, power.

Most amateurs get to the point where they’ve got so much pressure on the trail side that they can’t make a shift to the front side and get caught behind the ball. This causes the arms and hands to have to flip through impact to catch up.

As pros get to the bottom of their swing, the body has opened up and allowed for the clubface to square up.

“From here, they’re spinning and rotating and extending out of the way of the shot,” Yarwood says. “That allows them to manage the face and the path … That gets the shaft forward. That gets lean in the handle, lean in the shaft and that’s going to get the ball coming out really low and really powerfully.”

Check out the full video below.