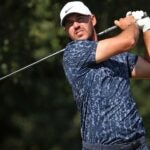 Brooks Koepka has been plagued by injuries over the last two years, and the ailments created several changes in his swing.

Professional athletes are bound to experience injuries throughout their careers, and Brooks Koepka is no exception. Knee injuries — as well as hop and wrist ailments — have plagued him over the last two seasons, and while he’s still been in contention at most majors, he hasn’t won a big one since the 2019 PGA Championship.

Koepka’s knee injuries have not only been painful, but they’ve also forced him to make changes to the way he plays.

At Augusta National, he admitted he’d plotted the “flattest line” to walk the course to minimize the toll on his knees. He also used an unorthodox approach for reading putts as another safeguard for his ailing joints.

But the injuries haven’t just made for funny-looking pictures on the greens — they’ve also forced him to alter the way he swings.

At the 2020 PGA Championship Koepka explained that the knee ailment was keeping him from shifting his weight to his front side, which resulted in uncharacteristic inconsistencies in his swing.

Koepka also had to adjust his stance as compensation for physical limitations. He moved his front foot a couple inches back to help getting to his front side and adjusted the width of his feet at address.

“My stance got so wide,” he told reporters at this week’s Hero World Challenge.

These changes helped guard against the injury-caused inconsistencies, but now that he’s getting closer to full health, he’s trying to rediscover the old fundamentals that he rode to four majors earlier in his career.

“It’s just going back and trying to find out — make sure everything’s, you know, the simple stuff like posture, grip, the way we set up to it, all those things are the same as what they’ve been,” Koepka said. “I’m very happy with the direction we’re going.”