Legend Bernhard Langer shoots his age on his birthday, just how he planned it 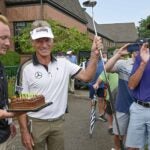 Bernhard Langer was presented with a birthday cake just before shooting his age on Friday.

Bernhard Langer is used to doing legendary things on the golf course. The two-time Masters champion’s Hall of Fame career has continued into his older years, where he’s set all kinds of records on the PGA Tour Champions.

Langer turned 64 on Friday, but instead of celebrating the occasion with family and friends at home, he was grinding out another week of pro golf at The Ally Challenge in Michigan. Such is the life of a 42-time European Tour and 41-time Champions Tour winner.

But Langer couldn’t let his big day go without some kind of recognition. So to properly mark the occasion, he decided to torch the Warwick Hills G&CC course playing host to this week’s event, incredibly shooting his age with an eight-under 64.

Shooting your age is one thing for someone in their 80s, or a former pro in their 70s. Impressive and rare, but not earth-shattering. But shooting your age before you turn 65 is an accomplishment on a whole other level.

Believe it or not, shooting his age on Friday was Langer’s goal all along, as he related to reporters following his round.

“I was texting with my family this morning because of the rain delay and I said, ‘My goal is to shoot my age today and give myself a birthday present.’

Not only that, but he revealed that shooting his age has been his goal for “two years,” and that he previously wagered a fellow pro on whether he could accomplish the feat.

“Actually had a bet with Scott McCarron when I was 62, we had a bet for dinner,” Langer shared. “If I don’t shoot my age, I owe him dinner. If I shoot my age, he owes me dinner.”

The Hall of Famer happened to share the same story with his playing partner that very day over breakfast before their round began, as Langer recalled in his press conference.

“I told the story to Rod Pampling over breakfast. I played with him and he was rooting for me all day long and cheering me on, so it’s pretty special.”

According to Langer, there’s a lesson to be learned here for all golfers at all skill levels: you have to visualize clear goals to have any hope of achieving them.

“Just shows you the strengths of the mind,” he explained, “If you put something in your mind and a goal… sometimes you can achieve it.”

The memorable round may be a first for the German star’s career, but he’s used to defying the odds, and his age, on the course. As with all other former Masters champions, Langer has a lifetime invite to the first major of the year. Unlike many of the older champions, his appearance is in no way ceremonial. Just last November, the then-63-year-old finished T29 at Augusta National.

The important question for the rest of us is how in the world does Langer continue to perform at such a high level while advancing in age? Fortunately, he gave a revealing answer to that on Friday as well.

“Well, it’s a lot of fun, that explains it,” Langer began. “I’m still reasonably healthy. I have lots of aches and pains, but I’m reasonably healthy. I can do this still fairly well and still be competitive. I know Father Time is ticking and it won’t last forever, so I’m trying to enjoy every day I’m out here.”

Wise advice for all of us.