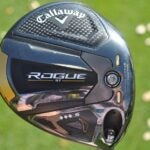 Xander Schauffele’s mix of new and old-school gear makes for an intriguing setup. It’s a reminder that the latest tech and tools from as far back as 2016 can coexist in the same bag.

During a recent trip to Austin, Texas for the WGC-Dell Technologies Match Play, I had the opportunity to dig into Schauffele’s setup and highlight some of the things that make his gear unique. Below are 7 items that stood out.

We’ve seen pros use a black permanent marker to remove scoring lines from the driver face to create a preferred look at address. Concealing the lines can take a head that looks visually shut and make it look square to some golfers. It’s also a good way to reduce the amount of face that’s seen at setup.

In Xander Schauffele’s case, the custom white lines found on the face of his Callaway Rogue ST Triple Diamond S driver are meant to have the opposite effect — adding visual loft and bringing the face into focus. For Xander, the original silver scoring lines on the face made it appear as if there wasn’t enough loft when he put the driver down.

Instead of asking for something different, Austin Kaiser, Schauffele’s caddie, painted white lines on the face to mimic the pattern currently found on Callaway’s Mavrik.

“Xander found the orientation of the Mavrik scoring lines to the best thing to his eye,” said Callaway Tour rep Kellen Watson. “At setup, it looks slightly open and pointed to the right — but with substantial loft. Enough to where he felt like he wouldn’t underspin it or hit anything wild from time to time.”

A club that works in crunch time has staying power. For Schauffele, a Callaway Mavrik Sub Zero 7-wood has turned into one of his favorite clubs in the bag due to the versatility it provides in different situations.

Prior to the club’s inclusion, Schauffele employed a Mizuno MP-20 HMB 3-iron but eventually found the additional loft and fairway wood sole on the Mavrik to be a benefit when attacking par 5s and extracting the ball from the rough. The 7-wood has continued to rise in popularity over the past few years and is currently used by a number of high-profile pros, including Cameron Smith, Dustin Johnson, Marc Leishman and Viktor Hovland.

“He’s able to get that increased launch a lot of guys are looking for in the higher lofted fairway woods,” Waston said. “It’s a carryover for him as he moved into some of our new equipment this year, and it’s something he trusts and wants to keep in the bag. There are clubs you know guys aren’t interested in changing. This is one of those clubs.

“At the time it came out, that Sub Zero had some flexibility in terms of sole weight manipulation. The introduction of that 7-wood was actually brought on by Marc Leishman’s interest in it. I knew if we couldn’t get a 5-wood that would spin correctly and go the right distance, we wouldn’t have a chance to have a very tactical club in his bag right now.”

It’s not uncommon for a pro to change driver shafts but leave the fairway wood builds intact. In Schauffele’s case, however, he chose to start with the driver shaft — a Mitsubishi Kai’li White 70TX — at the Hero World Challenge and then continue fairway wood testing during the winter break.

In the end, Schauffele found Kai’li White to be a worthy option for all three woods in his bag.

“Knowing Xander, we knew anything that was manufactured in Japan would be appreciated,” Watson. “We gave him shaft setups from different brands to test out, and the Kai’li White won the race in the end. He’s the kind of guy who’s going to test shafts if something is working well in one club. In this case, it was a gradual transition after the driver. Having a similar feel in all the woods is something is certainly likes.”

What’s interesting about Schauffele’s Kai’li setup is that he prefers to play a 70-gram TX part in the driver and 3-wood, before adding an additional 20 grams to the 90TX shaft in the 7-wood. The heft offers stability in a fairway wood designed for control over pure distance.

Not just for Tour

The raw finish on Xander Schauffele’s Callaway Apex TCB irons screams “tour only,” but you can actually score the same setup — if you know where to look. While Callaway trumpeted the release of its X Forged CB at retail, it also rolled out an Apex version with similar traits called TCB (“Tour Cavity Back”) that’s currently available via custom order.

The compact cavity-back iron is the preferred option for players of Schauffele’s caliber who require workability but also want some semblance of mis-hit protection to go along with the buttery forged feel at impact.

“The TCB has been a massive hit since they were released on Tour,” Watson said. “The feedback we’ve received from guys like Xander is it doesn’t everything they want without having to make any performance or profile sacrifices.”

Schauffele plays an Apex TCB head made from raw carbon steel, which means the head will develop a patina over time. It’s a look some players prefer, but there are exceptions. As you can see in the above image, the raw carbon steel transitions into a chrome finish prior to the score lines.

Raw carbon steel grooves have a tendency to wear out faster over time, so adding a chrome finish to the face ensures Schauffele can use the irons without worrying about dulled grooves affecting spin. It’s one way to give the sticks some additional self-life.

Vokey’s SM6 wedge was released in 2016, making it old by today’s tour standard. Assuming there’s was a story behind Schauffele’s decision to stick with SM6, I reached out to Vokey Tour rep Aaron Dill for the scoop. In the end, it turned out there wasn’t much to Schauffele’s choice in sand wedges.

“He just loves that head,” Dill said via text. “That was the first model we made back in the day and he trusts it. I wish I had a better answer for you.”

“He and Austin decide which one best fits the weekly conditions,” Dill said.

We’ve already touched on Schauffele’s putter, but it’s worth pointing out the subtle changes some players will make to their gear. In X’s case, he traded in a red Odyssey O-Work #7CH for the same putter head in a silver finish to see if a more subdued visual setup helped get the putter on track.

Schauffele also chose to change the color of the paint on the alignment lines from a bright white to a black that popped against the silver finish. In the end, the black paint on one line, in particular, sold Schauffele on the White Hot OG #7CH.

“It was that small line on the topline,” said Odyssey Tour rep Joe Toulon. “He was already using a black line on the side stamp of the ball, so the addition of a black alignment line on top made him feel like that line extended from the putter to the ball. For him, it was all about helping with alignment.”