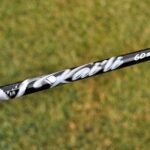 It’s quite possible you’ve heard the name “Kai’li” before if you’re well versed in Mitsubishi shaft profiles. Roughly 12 years ago, Mitsubishi Chemical unveiled a model under the popular Diamana line called Kai’li — a stable, low torque design that catered to the better player who needed a bit more reinforcement.

It’s natural to assume the new Kai’li is a reboot of the original product — only this product isn’t an add-on to an existing line. For the first time in six years — going back to the launch of Tensei in 2015 — Mitsubishi is releasing a brand-new shaft line under the Kai’li name.

“This is not to be mistaken with the Kai’li that was part of the Diamana line back in the day,” said Mitsubishi Tour rep Avery Reed. “This is going to be its own family, its own line. When you look at the name Kai’li, it’s meant to invoke the power and mystery of the ocean. In today’s world, we’ve only discovered about 15 percent of the ocean, and we feel the same with golf technology as far as shafts are concerned.”

The initial low launch, low spin Kai’li White ($300) offering was created around the popular White Board profile with a tapered butt section that varies in diameter and more closely resembles what’s currently found in the Blue Board series.

“If you look at our entire Blue Board series, which are all tapered butt shafts, they are by far our best feeling shafts in the series,” said Tod Boretto, a Mitsubishi Chemical composite design engineer. “That taper allows the frequency to come up and not truncate when it hits a constant diameter section. You get a broader spectrum of feel with a tapered shaft.”

In layman’s terms, it means the new Kai’li White won’t have the typical stiff, “boardy” feel that golfers have come to expect from lower torque shafts. The increase in feel can be attributed to Mitsubishi’s low resin content prepreg that comprises the torque core — better known as the part of the shaft controlling feel and feedback.

“What we learned about 4 to 5 years ago is how important the torque core is to the golf shaft, with respect to feel,” Boretto said. “What we were trying to do was take a relatively low launch, low spin, relatively stable, stiff shaft — which inherently feels bad to most golfers — and make that a soft feeling shaft with the performance we’re looking for.”

According to Mitsubishi, most graphite shafts use a standard resin content made up of 35 percent resin and 65 percent carbon fiber. In the case of Kai’li White, the resin content is driven below 20 percent with the help of MR70 fibers and low resin content prepreg to improve the feel.

“It’s a real challenge to even make the composite material before we start rolling the shaft, so there’s a lot of technology in just making the material to achieve this outcome,” said Boretto. “What that does is increase the envelope of frequency that a golfer feels coming up into their hands. We’re able to capture higher frequencies at a faster speed coming up into your hands.”

The shaft’s responsiveness creates a greater spectrum of feel that doesn’t mask mishits, meaning golfers won’t be left in the dark regarding whether they hit it pure or off-center. Immediate, accurate feedback is critical for better players who need to corral launch and spin but don’t want to give up the control and smooth feel they might be able to find in a Blue Board profile. In other words, the shaft is designed to do it all.

Danny Willett has already given Kai’li White some early Tour validation with a win at the Dunhill Links Championship, and other players have since added the shaft to their driver setup, including Nicolas Colsaerts, Sepp Straka and Jordan Smith.