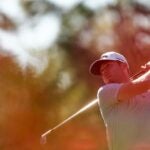 Part of the gig as an equipment writer who spends an inordinate amount of time stalking the driving range and putting green at PGA Tour events is spotting gear changes. Some are easier to spot than others — like Scottie Scheffler changing 3-woods. Others take a bit more detective work to unearth.

And then there’s the club change Sam Burns made earlier this year that flew completely under the radar until his win in March at the Valspar Championship. Compare Burns’ Callaway setup from last year’s win at the Sanderson Farms Championship to what he used at Valspar and you’ll notice a significant change in the scoring tools department.

In October at Sanderson, Burns used four Callaway MD5 Jaws wedges (46, 50, 56 and 60 degrees) en route to victory. Five months later, he cut the number in half, replacing the 46- and 50-degree MD5 with an Apex TCB pitching wedge (PW) and attack wedge (AW).

It’s not uncommon for a pro to carry a pitching wedge that matches the rest of their iron set — although blade pitching wedges continue to rise in popularity — but a matching attack wedge is a unicorn on Tour. (For golfers who’ve never heard the name “attack wedge” before, it’s another name for a gap wedge. In most cases, the loft ranges from 50-52 degrees.)

If Burns was a mid-handicapper, an attack wedge wouldn’t look out of place in his bag setup. It’s standard practice for most game-improvement sets to offer an attack wedge. Elite players, however, tend to rely on better-player iron designs — and those almost never come with an attack wedge.

The reasoning is quite simple: better players have historically played wedges featuring a blade design, so there was never a need to extend better-player creations beyond the pitching wedge. This is part of what makes Callaway’s Apex TCB so unique. Through player feedback, Callaway designed an attack wedge for the Apex TCB set that’s currently being used by Burns and Dylan Frittelli.

For Burns, the decision to add a matching Apex TCB attack wedge came from offseason work with coach Brad Pullin that revealed inconsistencies from 125-135 yards for the three-time Tour winner. Instead of simply ramping up practice from the yardage, Burns reached out to Callaway to see if they had a solution.

“[Dean Teykl, Manager of Tour Operations and Player Performance at Callaway,] and Sam have done a lot of work on his setup going back to the early days prior to him signing with Callaway out of college,” said Callaway Tour rep Kellen Watson. “So there’s a trust level there where if Sam needs something, he knows he can go to Dean.

“[Adding an attack wedge] was kind of a new venture for us when it came to these sets of irons that came out in 2021. In terms of the AW versus the MD5 Jaws 50-degree Sam was playing previously, simply put, the AW is going to be more forgiving and offered a slightly wider sole and more bounce. The belief was a bit more forgiveness could be a good thing in this case.”

In the end, the addition of perimeter weighting and a slight bump in mishit protection allowed Burns to shore up his misses and not worry about the occasional mistake.

“Usually for Sam, I’d say he’s using the attack wedge 70 percent of time for full shots and 30 percent for three-quarter and half shots with it,” said Watson. “The natural blade look and feel of the 50-degree MD5 will produce a lower launch with a more aggressive spin profile. If that’s something the player isn’t looking for and wants to move away from and have more of a continuity between the pitching wedge and the rest of the wedges in his bag, sometimes guys tend to aim toward the iron feel of things instead of the wedge feel of things.

“In Sam’s case, the familiarity of the whole set of TCBs he has — the window it comes out of, the bounce/spin profiles, toe hits, and slightly thinned shot — is something he knows and trusts. The attack wedge just fits in there perfectly. We’re seeing our guys be intrigued by the offering now that it’s available. If there’s value to changing to it, why not? They’re all trying to save maybe one, two or three shots a round in the scoring club areas.”

Golfers of all handicaps can learn a thing or two from Burns’ unique gear change. Even if you play a set of better-player irons that doesn’t offer an attack wedge, there’s nothing wrong with trying out a cavity-back wedge to see if it helps on full shots from around 130 yards. (Ping’s Glide 4.0, Callaway Mack Daddy CB and Cleveland CBX are just of a few of the options available to test out.)

Sometimes it pays to think outside the box.