Understanding the most popular escape shot from U.S. Open rough 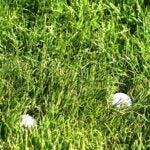 In the rough on the 15th hole at The Country Club.

The U.S. Open is known for rough so thick, if often forces players to hit a wedge just to get back into play. For those watching at home, the most popular recovery shot you are likely to see from the heavy stuff this week at The Country Club is a low punching hook with a wedge ⁠— here’s why.

Let’s start with the obvious. Thick rough creates unpredictable lies, which can cause big fluctuations in strike points around the face. Leading up to the U.S. Open we touched on why fairway woods are an effective tool from the rough, but there is still a reason pros will grab a wedge to get out of jail.

Wedges have the tallest and largest face surface area of any club that’s not a 460cc driver. This larger hitting area means that if a player happens to miss a little high or low, which are the most common misses out of heavy rough, there is enough face area and mass behind the ball to still advance it back into play.

To present this larger face area the shot needs to be played with the hands more forward at address, which also steepens the swing into impact with the goal of creating less resistance. When all of these factors come together it makes for the easiest way to escape, except for one small issue; the shaft and the hosel.

Where the shaft goes into the club head is called the hosel, and wedges have some of the tallest hosels of any club in the bag. Long grass is the arch-enemy of the wedge hosel and shaft, catching it as the club approaches the ball at impact causing the club face to quickly close and forcing the ball to dart out low and left (for a right-handed golfer). The pros know this better than anybody and plan accordingly, so next time you see a low running punch shot from the rough this week at the U.S.Open, you’ll know it was on purpose.