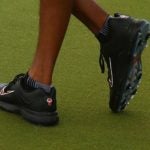 Frank made a surprise appearance on Tiger's shoes at The Match II.

It might not have been the typical weekend golf we’re used to, but Tiger Woods still donned his traditional Sunday garb for The Match II. A black “TW” hat matching his (questionable) black shorts and, of course, his trademark red shirt to tie it all together. For one blissful afternoon, balance was restored to the world as Tiger put on a stripe show all around the soggy Medalist Golf Club.

But in the midst of this ball-striking clinic, you might’ve missed the new gear Tiger was wearing. True to tradition, Tiger matched the black of his cap and shorts with his black Nike TW20 shoes. However, these kicks were special edition, emblazoned with Tiger’s Frank headcover logo on the heel. Check out the pictures below for more.

In addition to the Frank logo, the Nike swoosh sported tiger stripes on these one-of-a-kind shoes. Nike debuted the Frank logo and gear at last year’s Masters, with shirts and hats quickly becoming hot items. However, this is the first time the most famous headcover in the game has made an appearance on shoes.

Frank rose to fame in the late 90s as Tiger made his ascent to stardom. The headcover came from Daphne’s Headcovers and gained notoriety during Tiger’s epic 1997 Masters victory, then the plush feline’s career took off as Frank came to life in commercials with the help of comedian Paul Giamatti. You can read the entire history of Frank in this comprehensive feature from GOLF.com’s own Sean Zak.

The bad news for all you Frank fans out there is that these special edition shoes aren’t going to retail this year, so the earliest you can get your hands on them is 2021.