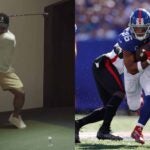 Saquon Barkley is obsessed with golf — and getting better at it.

Let’s play a word association game. What comes to mind when you hear the name “Saquon Barkley?”

Some common answers may include: New York Giants, running back, NFL star. You definitely don’t think “golfer.” But that’s where you’d be wrong.

When the 24-year-old Giants running back picked up the game over the summer, the golf bug bit him hard. Like Aaron Rodgers, Tom Brady, Patrick Mahomes, Travis Kelce and other NFL stars, Barkley has found an outlet for the innate competitiveness that comes with being an elite athlete. And he’s dead set on getting better.

“I’m super competitive,” Barkley said. “And I can’t beat my boys in this yet.”

He wants to be the best at everything he does, golf included. That’s a tall order for someone who just picked up the game, and it’s exactly why Barkley walked through the doors of True Spec Golf’s Downtown NYC location in August — a pit stop before his 3 p.m. tee time later that day. (True Spec Golf is owned by the same parent company as GOLF.com.)

We weren’t sure what to expect with Barkley’s fitting. He has “the strongest legs in the NFL,” to hear him tell it, and is clearly an incredible athlete, but golf is a difficult game for even the most athletically gifted. Yet once Barkley started swinging, his raw power was evident. Barkley went after every ball with the enthusiasm of Bryson DeChambeau at a long-drive contest. And when he got a hold of one, boy did it fly — his best drive went 350-plus yards.

As a beginner, Barkley’s raw technique left him with a two-way miss, making the main goal of this fitting to straighten out his shots and gain some distance.

Fitting a beginner with his strength can be a challenge, though, because the ceiling for improvement is so high and his swing could change drastically as he gets better. Despite that, when it comes to getting fit, True Spec Master Fitter Caulen Coe says it’s best to fit the golfer you are now rather than the golfer you will become, that way golfers can benefit from immediate results on the course.

“With how much he said he wants to play, if he starts working with the right instructor, his technique is going to get better,” Coe said.

Throughout the fitting, Barkley couldn’t get enough. Every time Coe needed to switch out a clubhead or swap in a different shaft in an attempt to find him the best setup for his game, Barkley would beg to hit another. “Just one more,” became the phrase of the day.

Barkley didn’t just enjoy hitting golf balls, though. He was invested in the process. His eyes sparkled whenever Coe opened a drawer filled with shiny new clubheads. And when it was time to review the results of various club builds he’d just put to the test, Barkley was ready with questions.

This investment in the club-fitting process is something Coe pointed out as necessary for finding the right clubs, whether it’s for an NFL star or an Average Joe. Coe said it was like getting a suit tailored — there’s a perfect fit for everyone.

“If you’re going to come to True Spec, you’re saying ‘I’m going to put the investment in,’” Coe said. “And hopefully if you put in the time and the effort, you’ll get better.”

As the fitting finished up, Barkley checked his watch and then asked his agent a question.

Ready to overhaul your game? Find a fitting location near you at GOLF’s affiliate company True Spec Golf.