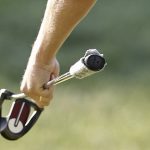 Harris English's worn Ping Palm Lock putter grip had to be modified before his Sunday singles match at the Ryder Cup.

Happy Holidays from our gear team at GOLF.com. To bring you into the New Year the right way, we’re counting down our top 21 equipment-related stories from 2021. For the latest gear news, check out our dedicated equipment section, and click here to listen to GOLF’s Fully Equipped weekly podcast.

Out of all the stories I wrote this year, the Ryder Cup rules saga surrounding Harris English’s well-worn Ping Palm Lock putter grip has to rank at the top of the list. It involved a piece of gear we rarely discuss — unless your first name is Tiger — and an equipment snitch who somehow got the attention of an on-site rules official. (And here I thought armchair rules officials were a thing of the past.)

The story is almost too good to be true, assuming you’re a gearhead.

What’s even crazier is the story likely never would’ve seen the light of day had it not been for a post-Ryder Cup interview English conducted on the Fore the People podcast with pro golfers John Peterson and JJ Killeen, where he shared the story for the first time.

“I get to the course on Sunday — I’m literally walking into the clubhouse — and I get a call from Steve,” English recalled on Fore the People. “I had no idea what he was calling me about; he hadn’t called me this whole week. He said, ‘Hey Harry, I’ve got some bad news. We’ve got the head rules official here and he wants to take a look at your putter grip.’ I’m like, s—.

English’s grip was already fraying at the butt end, revealing cloth material that was originally situated under a rubber casing. Unsure if the wear-and-tear had rendered the grip unusable, rules officials took a closer look at English’s grip and deemed it to be non-conforming.

If you want to read the article in its entirety, check it out here, but the tl;dr version concludes with Davis Love III coming to English’s rescue in the dying minutes, X-Acto knife in hand, to get the grip conforming. Potential disaster averted.

In the weeks that followed, English worked with Ping to try and save the grip. But it never quite felt the same. In the end, he removed the grip and replaced it with a fresh Palm Lock. The moral of the story is you should never snitch.